From the Middle Ages to modern times, mystics call us to intimacy with God 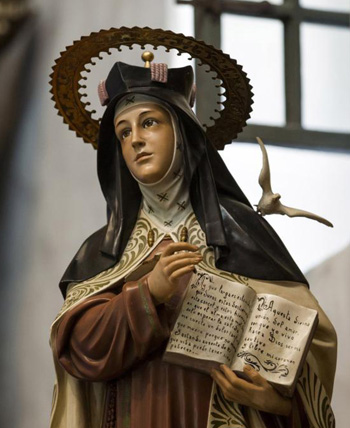 A statue of St. Teresa of Avila, Spanish mystic and doctor of the church, stands in the sanctuary of the Serra Chapel at Mission San Juan Capistrano in San Juan Capistrano, Calif. We are all called to be mystics on some level. God is present to us and desires us. (CNS photo/Nancy Wiechec)

In the church of Santa Maria della Vittoria in Rome stands what art critics believe to be one of the great masterpieces of the Baroque era: The Ecstasy of Saint Teresa by Gian Lorenzo Bernini.

The 17th-century statue, in stunning white marble, is also perhaps the most powerful artistic depiction of the mystical experience.

In Bernini’s classic sculpture, the great mystic St. Teresa of Avila lies back, her eyes closed, her mouth gaping open, as an angel of the Lord pierces her with a golden spear.

The rendering follows almost exactly the words of St. Teresa as she wrote of this powerful union with God: “So surpassing was the sweetness of this excessive pain, that I could not wish to be rid of it. The soul is satisfied now with nothing less than God.”

The sculpture portrays a total merger of body and soul into the divine — a classic definition of mysticism at its most complete.

Having seen The Ecstasy, one can be forgiven for asking what relevance mysticism might have to our own spiritual experience. It’s hardly the stuff of our everyday prayer.

What is mysticism? Present in almost all religious traditions, Merriam-Webster defines it as the experience of “direct communion with ultimate reality.” Again, this might be a bit intimidating to the average “pray-er.”

Yet as Catholics, we believe in a personal God, who speaks to each of us and is actively present in our lives. Are we called to be mystics?

The Catholic tradition boasts great saints who were mystics, including St. Joan of Arc, who believed God told her to lead the French forces in battle against England in the 15th century.

Then there’s Julian of Norwich, who wrote of her experiences encountering God in “Revelations of Divine Love in Sixteen Showings,” and more recently St. Therese of Lisieux who claimed to have experienced mystical union with Christ at her first Communion at age 11.

St. Hildegard of Bingen, whom Pope Benedict XVI declared a doctor of the church, claimed divine visions since early childhood.

Although there are certainly male mystics (the 16th century St. John of the Cross comes to mind), and there have been mystics in all generations, the Middle Ages saw a flourishing of mysticism among females.

Why would this be? Is there something about female receptivity that made them more open to mystical experience?

We can only guess, but one possible explanation is that women — assuming they went into the convent — had more time for contemplation. Unlike today, religious women were not involved in active ministry — that was men’s work.

Women were sequestered in convents that had libraries and some learned to read. Not burdened with typical women’s work, and not subjected to numerous pregnancies and the deadly hazards of childbirth, they often lived longer than other women.

Julian of Norwich died in her 70th decade in 1416, and St. Hildegard of Bingen lived until her 80s in the 12th century, remarkable ages for woman of their eras. Perhaps these women had more time for the experience of God.

And the Middle Ages were a time and a milieu open to divine revelation in a dramatic way.

Today, we live in an age saturated with rational, scientific explanations for everything. We better understand mental illness, and if someone claims they hear voices today, our first and reasonable thought is to question their mental health.

Although the language of the Mass reminds us that we believe in “things visible and invisible,” we moderns often adhere to what we can see and prove with our own eyes. Unlike earlier eras, we can be skeptical of miracles.

On the other hand, the last 100 years have seen an explosion of claims of apparitions by Catholics. But the church is very cautious with these, and few are ever validated. Two young visionaries of Fatima were recently canonized, and Our Lady of Guadalupe and Lourdes are examples of approved apparitions.

But these, and the mystical experiences of the saints, are considered “private revelations,” and are not something a Catholic is obliged to believe. The Catechism of the Catholic Church explains how private revelations can be helpful, but are not considered part of the “deposit of faith” (No. 67).

So what of us? How do we reconcile mystical experiences with our own humble prayer life in an age of skepticism?

We believe in a God who intervened in human history by sending Jesus among us. In each generation, God communicates with people in their own language, through their experiences, in their culture.

We search for God in all things, and as Catholics we believe God is not remote, but intimately involved in our lives.

So if mysticism is how we relate to this mystery, perhaps we are all called to be mystics on some level. God is present to us and desires us.

In seeking to hear God’s will in our lives, it’s always prudent to have someone in whom we confide about our spiritual lives. All the great mystics did, and that’s good advice for the 16th century or the 21st.

PREVIOUS: Mysticism and the modern believer

NEXT: Mysticism is found in the everyday experience of God