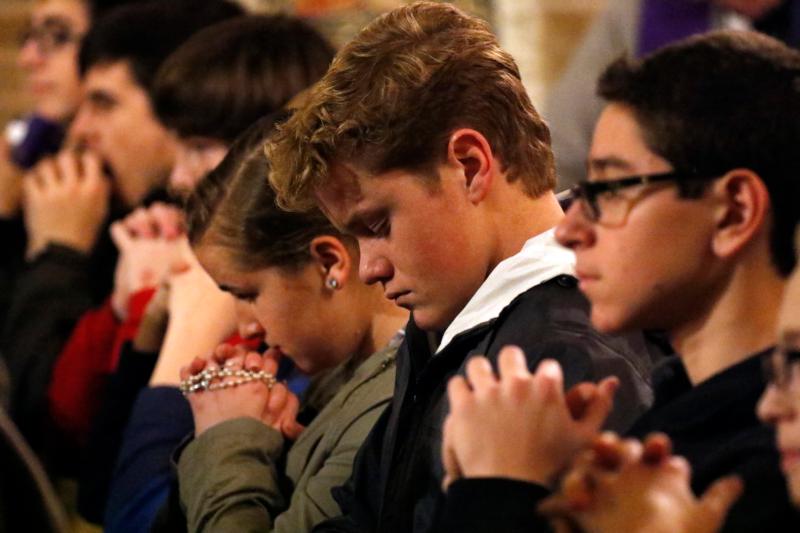 Teenagers pray during a Holy Hour for vocations Jan. 20 at St. Patrick Church in Bay Shore, N.Y., sponsored by the vocations office of the Diocese of Rockville Centre, N.Y. (CNS photo/Gregory A. Shemitz, Long Island Catholic)

Attracting and building young adult ministries requires social skills, sometimes musical skills (Karaoke nights just don’t organize themselves, you know), a strong knowledge of the basics of Christian faith and Catholic beliefs, and a warm appreciation of the unexpected.

Which brings us to adult dodgeball.

The fast-moving playground staple (once featured prominently in an episode of “30 Rock”) is hugely popular in Manhattan, says Colin Nykaza, director of young adult outreach for the past six years at the Archdiocese of New York.

Also, it sort of sums up young adult ministries. They have to stay in constant motion and offer a variety of ways for people to connect.

Careful attention to faith fundamentals has worked well for John Johnson, coordinator of youth and young adult ministries at St. John the Baptist Catholic Church in Folsom, California, and also one of the organizers of the Veritas young adult ministry. “If you’re willing to bring young adults to Jesus, then the rest takes care of itself.”

This focus, both say, involves looking after those who have felt disenfranchised by the church since their confirmation or, as Johnson puts it, coming up with “something to draw them back.” Always, Nykaza says, this type of ministry is event-driven, and “meets the young adult where they’re at in their faith.”

Dan Ferrari, the young adult minister at St. Paul Inside the Walls, an evangelization center in Madison, New Jersey, concluded, “We found that the initial seeds that were planted, either in Catholic school or a household, need to be watered again.”

Johnson calls that the “heart of the ministry,” adding, “Christ himself turns out to be the most attractive element for young adults.”

The New York Archdiocese, working up its plan to submit to next year’s world Synod of Bishops on “Young people, faith and vocational discernment,” divides activities into four categories: “Disciple” events include monthly young adult Masses; “friend” events include speaker series and Bible studies; “acquaintance” events include a Mass followed by a dance at St. Malachy’s, the famed Broadway “Actors’ Chapel”; and the “seeker” events, which are mostly secular, include jazz and bowling nights as well as sporting events.

Johnson, who has been active in young adult ministries for nearly 10 years, cautions against “campy, cheesy gimmicks that seem like something copied from baby boomers. Young people distrust anything that lacks authenticity.”

Trying to reconnect to adults in their 20s and 30s, “community is the most important thing,” Ferrari says. “It’s about getting young adults to connect to a point of excitement about the church.” For some participants, “they haven’t talked about Jesus in years.”

But, Johnson cautions, “You can’t just create community. That’s like going up to somebody and saying ‘Let’s be friends.'”

Simplicity is effective. A monthly get-together at Monk’s Cellar, a bar in Roseville, California, draws as many as 100. “It’s always on Monday nights when business is slow, so the bar is happy to have us.”

Ferrari says Wednesday evening discussions dubbed “fireside chats” have been effective, but one of his most popular events are Wednesday night summer barbecues.

When it comes to the faith message, Johnson says it’s important to avoid heterodoxy.

NEXT: Reaching ‘out of the box’ to Catholic young people