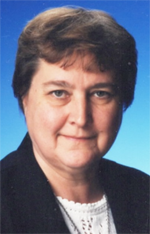 Born in Torrington, Conn., on Oct. 15, 1942, she was one of five children of Andrew and Helen (Vasko) Urda. She attended Sacred Heart School in Torrington and her junior year at Torrington High School. Her three other high school years were spent at St. Cyril Academy in Danville, where she graduated in 1960.

Sister Teresa entered the Sisters of SS. Cyril and Methodius in Danville in September 1961, and was received as a novice in August 1962. She made her first profession of vows on Aug. 13, 1964.

She taught in schools in South Carolina, Connecticut, Indiana, and in Lebanon, Pa., and at the former St. Pius X High School in Pottstown. She also served at the order’s motherhouse in Connecticut and volunteered at a hospital in Danville.

Sister Teresa was particularly interested in environmental concerns and had a gift for writing and editing. Each week she sent out the Focus newsletter which apprised the congregation’s sisters of particular activities and achievements. She also managed publicity for the activities of the St. Cyril Spiritual Center, one of the congregation’s ministries located in Danville.

As moderator of the St. Cyril Academy Alumnae Association, she compiled news for The Challenge, the newsletter of the organization. Her most important achievement was writing the history of the first hundred years of the Sisters of SS. Cyril and Methodius.

Sister Teresa is survived by a sister, Helen Borkowski; a brother, Cyril; and several nieces and nephews.

The funeral Mass was celebrated April 7 at Maria Hall by Father Gerard Heintzelman, with Father Patrick Devine concelebrating. Burial was in the sisters’ cemetery.

Donations in memory of Sister Teresa can be made to the Sisters of SS. Cyril and Methodius, Villa Sacred Heart, Danville, PA 17821.