Spiritual direction for today and tomorrow 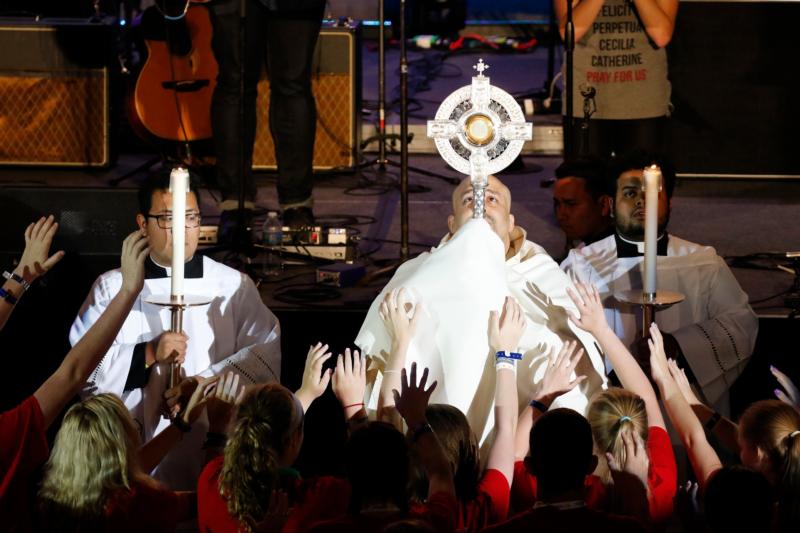 Father Joseph Espaillat, spiritual director of the Archdiocese of New York’s youth ministry office, elevates a monstrance during eucharistic adoration June 25, 2016, at the Steubenville New York youth conference at St. John’s University in Jamaica, N.Y. Often, a life crisis or deep desire to better clarify someone’s relationship with God can be the catalyst to seek a spiritual director. (CNS photo/Gregory A. Shemitz)

Spiritual direction is not only for those seeking to discern a vocation to the priesthood or vowed religious life. Often, a life crisis or deep desire to better clarify someone’s relationship with God can be the catalyst to seek a spiritual director.

Father Bill Murphy, director of spiritual formation at Pope St. John XXIII National Seminary in Weston, Massachusetts, says, “The benefit of spiritual direction for someone who engages it is that there’s a relationship with someone that’s ongoing and who can help the directee connect the dots in his or her life regarding the movement of the Spirit in his or her own life.”

“It helps give the directee resources to identify what God is calling him or her to,” he says, “what place of growth. Also, where to resist and how to resist temptation. It’s a movement away from sin toward grace that we’re all called to make, and in one way or another, we all need help with that.”

There is no general certifying organization for the ministry. However several resources can assist someone seeking a qualified spiritual director.

Priests, religious and laypeople formally trained in spiritual direction can be found through the many retreat centers, schools of theology and other religiously focused institutions, as well as through local parishes, diocesan offices and via Spiritual Directors International (www.sdiworld.org).

“Ask about their training,” says Van Ness. “and whether they are in spiritual direction themselves and in supervision. Life experience, practical wisdom, make a difference, too.”

“Have a conversation to see if you want to have another conversation,” says Father Murphy. “A good director has a willingness to listen more than speak, to ask questions about what the person has said and prompt and invite the person to go deeper, to articulate more about what they’re revealing.

Spiritual direction can take place in person, over the telephone or even via web-based conferencing programs. First, the director and directee will discuss and agree to expectations, fees and other issues, such as confidentiality and responsibilities.

Ballotti accompanies a variety of people in spiritual direction, and they come to her for many different reasons.

“The loss of a job, death of a spouse,” says Ballotti. “One person lost her job, house and health. Some people come in kind of beat up by life.”

Ballotti’s life experience and training help her with each individual directee.

“Before I earned my certificate in spiritual direction from the three-year training program at Mount Saint Mary’s in Los Angeles, I used to be a sales rep for a Catholic publisher,” says Ballotti.

“I got used to going into unfamiliar territory, learning my way around. There was a kind of expectation, ‘Every day is a gift. What’s today going to bring?’ Now, when someone comes to me, I’m never sure what they want. I’ll have that same sense of anticipation.”

The spiritual director does not hand the directee answers, but rather accompanies him or her in the journey through the questions.

“People have to be willing to go to the painful places and be really honest with themselves,” Ballotti says. “A good spiritual director is someone who walks in the dark with you and holds the light. When people sit and spend time with what’s going on, they have the answers themselves. It’s really a grace to be able to witness that.”

(Pratt is a columnist for Catholic News Service. Her website is www.maureenpratt.com.)

PREVIOUS: How can Catholics use Scripture in spiritual direction?

NEXT: What is spiritual direction?