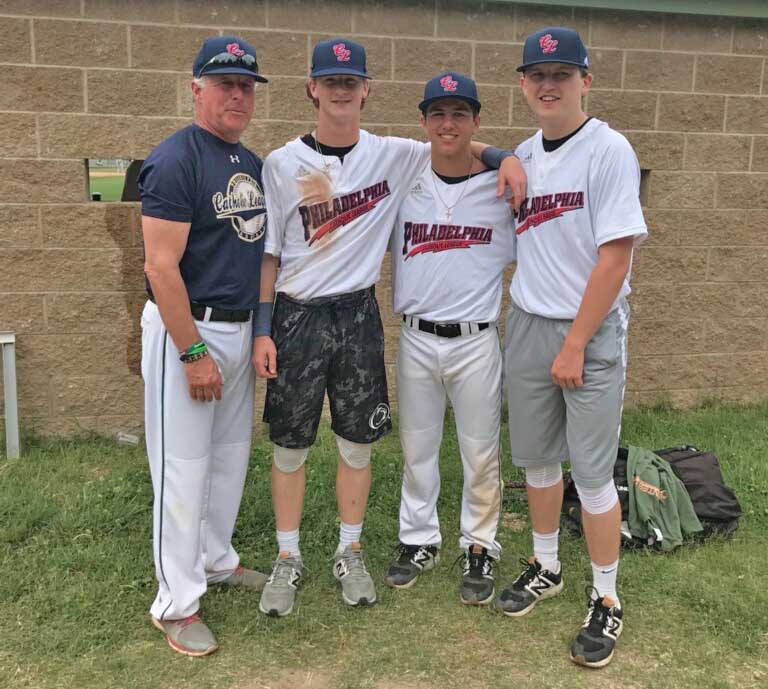 From left at the Carpenter Cup baseball tournament June 14-24 in Philadelphia are some of the Catholic League’s squad, from left: Bonner Prendergast’s Joe DeBarberie, Matt Headley, Nate Furman and Matt Scanlon.

Although the baseball season was finished for the majority of the players who comprise the Catholic League, 29 were chosen to represent all the others in the 32nd annual Carpenter Cup Classic.

The CL’s opening round attempt resulted in a rather forgettable 20-5 loss June 16 to Suburban One Conference, but it did not ruin the overall experience of participating in a revered event.

“Rivalries are fun, but once you’re teammates with someone, you have to play for them,” said St. Joseph’s Prep senior pitcher Colin Scanlon, who struck out three batters in two innings. “The rivalry is in the past. It was great meeting all of them and talking about the games we played against each other.”

“We might have lost, 20-5, but it was a good time for us and we had a good time practicing together leading up to our game,” said Kehoe. “It was a great group of guys and I wish it would have gone differently because I had a great time playing with the best guys in the Catholic League. We enjoyed ourselves and had a blast. Really looking forward for the next two years I have left of Carpenter Cup.”

According to La Salle junior Andrew Cossetti, who went 1 for 3, the seriousness of baseball meshed well with a brewing camaraderie.

“Playing in the Carpenter Cup is an honor,” he said. “You’re competing with the best players in the area along with players from other states. Just making the team is a great accomplishment. Playing alongside guys you’ve fought hard against all year is always interesting.

“The stories that come about and the jokes always lead to great laughs. That’s probably the best part about playing. The tournament didn’t end how we wanted to; however, we practiced hard in the days leading up it and as a team we left it all out on the field. We may have lost, but it was still a great time.”

“Although the score got out of reach, I thought we did not give up and played a full nine innings. Being able to get some hits, contribute to the game, and knock in a run is a great feeling because the team we played had a lot of talent.”

On the flip side, Bonner-Prendergast’s Nate Furman was playing in his first Cup after a splendid freshman season.

He is the brother of former B-P star Steve Furman, who just finished his first season at Iona College. Watching his brother, Steve recalled his Cup experience as “memories that I will never forget and helped shape me into the college ballplayer I am today.”

“They are great baseball guys who have helped keep the Catholic League on the map,” said Furman. “Overall, there’s not much like the Carpenter Cup.”

“The experience was great,” said Nihill. “I got to meet a lot of players around the Catholic League, and I just had a lot of fun.”
***

NEXT: Minnesota Vikings coach brings faith to the field