Parishioners are speaking of faith — in 20 languages 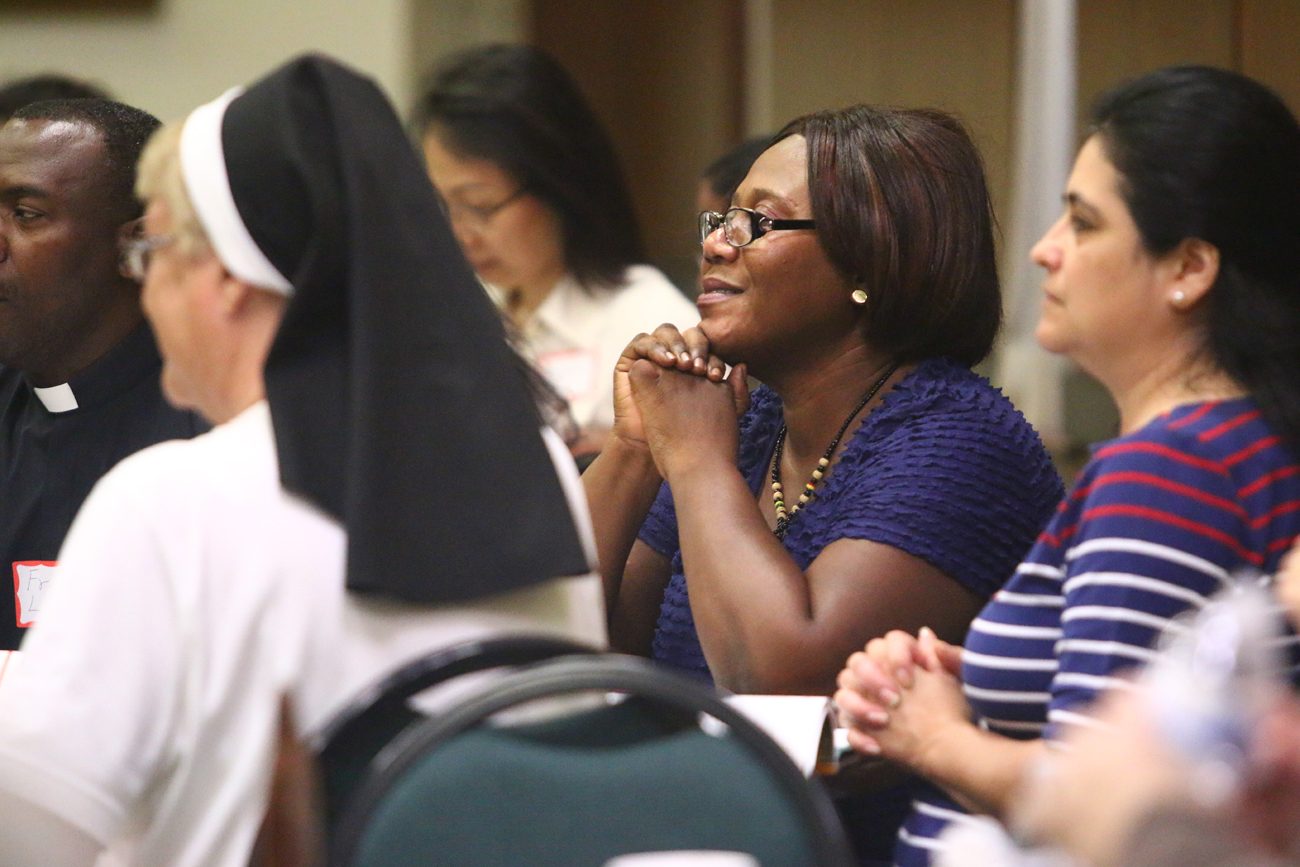 Catholics from across the Philadelphia Archdiocese study ways to address multicultural diversity in the church in a four-part series in July on the topic, sponsored by the archdiocesan Office for Pastoral Care for Migrants and Refugees. The final session was held July 12 at the Archdiocesan Pastoral Center in Philadelphia. (Photo by Sarah Webb)

Scripture tells us that on Pentecost the Holy Spirit gave the Apostles the gift of tongues. When they went out to preach everyone understood them regardless of their native language.

If you want to get technical, it wasn’t a gift, it was a loan. Down through the ages evangelizers have struggled to impart the Good News and catechesis to people who were not familiar with their language.

The obvious answer is whenever possible to have services in the language of the intended congregation.

This has been done in Philadelphia all the way back to the late 18th century, and continues to this day.

According to figures compiled by the archdiocesan Office for Parish Service and Support based on the physical counts taken in October 2016, slightly over 92 percent of Catholics who are attending Mass are attending an English language Mass.

Almost 5.5 percent are attending a Spanish language Mass and the balance in 18 other languages including American Sign Language and Latin, which is no one’s native tongue.

(See a complete listing of Masses in languages other than English.)

The first Catholic migrants to the Philadelphia area who were not speakers of English were mostly German speakers. Philadelphia’s third parish, Holy Trinity, was founded in 1788 as a German parish and was in fact the first non-English speaking parish in what was then the United States.

St. Peter the Apostle was founded in 1842, also a German parish. St. John Neumann, Philadelphia’s fourth bishop who is entombed there, came to America with the original intent of working among the growing German-speaking Catholic population.

There were no designated Irish parishes for the simple reason that although the Irish came to Philadelphia in droves they already spoke English, a language forced upon them in their native land.

Over time, 53 distinct personal parishes were erected to serve new Americans. Included in that figure were 16 Italian parishes, 13 Polish parishes and 10 German parishes, with the balance spread over other nationalities and ethnicities.

It does not include four designated African American parishes. They were erected because of the prevailing prejudice that inhibited their welcome at most of the territorial parishes.

Archbishop John F. O’Hara in a 1953 letter expressed the prevailing rationale for personal parishes. “If we fulfill our duties to immigrants, we welcome them as brothers,” he wrote. “If they cannot speak our language we provide them with a church of their own and priest who speaks their language, but we encourage them to learn English, adapt to American ways and become good citizens.”

That may not jibe with today’s emphasis on multiculturalism, but the statistics show that is exactly what has happened. Of those 53 personal parishes only a half dozen or so remain. The children and grandchildren and great grandchildren of the immigrant founders adapted to English and American culture and moved on to different areas.

That doesn’t mean the diocese no longer cares for immigrants, it does. First of all is they are not coming from Europe now but from Latin America, the Caribbean, Asia and Africa.

Secondly, today parishes are rarely erected to serve a specific nationality or ethnicity because experience has shown the ethnic population of a given area can swiftly change.

Sometimes a parish may become de facto an ethnic parish because most of the parishioners are immigrants, but in the future that could change again as it so often happened in the past.

At this time, according to the statistics, there are 34 parishes in the archdiocese that together offer a total of 47 Masses in Spanish.

Holy Redeemer in Philadelphia celebrates in English and both Cantonese and Mandarin Chinese.

But of course, no matter the language, the essence of the Mass, the transformation of bread and wine into the Body and Blood of Our Lord Jesus Christ, is exactly the same everywhere and always will be.