Get creative — start a ministry and build community 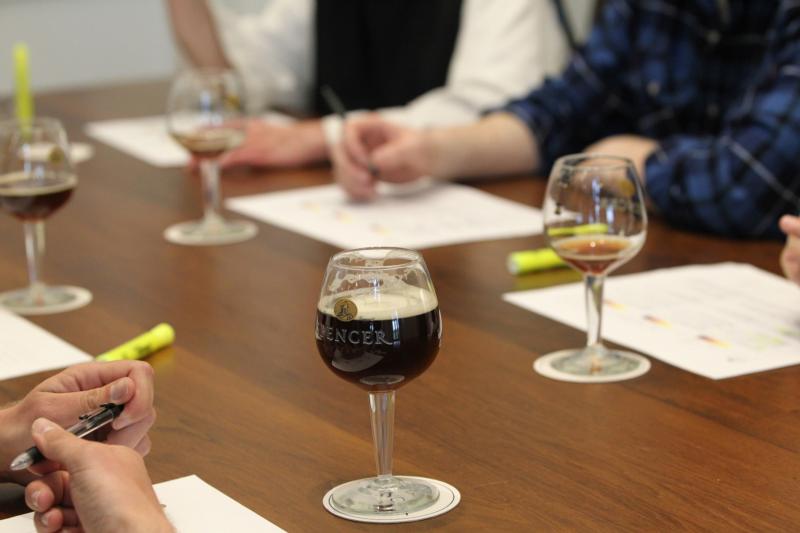 Trappist monks and lay workers evaluate beer samples during an April 29, 2015, taste testing at the first American Trappist brewery on the grounds of St. Joseph’s Abbey in Spencer, Mass. Methods of evangelization often call for creativity and thinking outside of the box. It doesn’t get more simply efficient and memorable than the Catholic Beer Club (www.catholicbeerclub.com). (CNS photo/Chaz Muth)

Evangelization often requires creativity and the ability to think outside of the box — or the barrel, as the Catholic Beer Club demonstrates.

Derek Hough and three of his friends didn’t set out to shock when they came up with the idea back in 2013, while they were students at Benedictine College in Atchison, Kansas.

But the name of their group holds a particular appeal. The first rule of Catholic Beer Club is similar to one reaction Hough received in Kansas City: “Hey guys, you don’t need to talk about it — I’m already there.”

Their first chapter was established in Denver. After four years, there are now 16 in what Hough describes as a low-key, hospitable evangelistic effort aimed at young adults.

The slogan is “No agenda — just community.” That means forming what Hough calls “a connecting point” for young adults at a restaurant, bar or microbrewery that lets participants “just run with it — wherever you want to go,” usually with monthly gatherings.

“It kind of ties into that discipleship compact and efforts to build community and discipleship,” he says.

Hough gives the Phoenix chapter as an example. It began with around five people, now attracts nearly 60, and “there’s new people every single time.”

The group recently “decided to dive deeper” and add Bible study. “They decided that on their own. We don’t want to get in the way,” Hough said.

There’s no intent of replacing the community of parish membership, but rather to find young adults where they are, and as they are. “Sometimes you have to run outside the parish,” Hough observes. “Well over half of young adults don’t attend the same parish week after week.”

The key to the Catholic Beer Club’s growth is finding the right people to coordinate the effort. “Not everyone has that focus,” Hough said.

It’s also important to find those who “understand the young adult’s struggle to find friends.”

Jo Holt, director of marriage and family life at St. Thomas More Parish in Centennial, Colorado, understood that in 2012 when she developed her curriculum for a single-parent ministry, Raised in Faith.

The ministry addresses not only single father and mothers, but also business travelers with a spouse at home. Those divorced, widowed and in the military are all welcomed.

“We’re a very transient area,” Holt said about her town, a suburb of Denver. “There are many with no relatives close by to depend on. So you really need a community of others to support you.”

An authentic relationship with Christ and a willingness to reach others are the only requirements. “We all can be disciples exactly at this point in time, with what we know,” Holt said. “We don’t have to be farther along in our faith.”

Her advice to others beginning a single-parent ministry is to simply announce the plans right away and begin a survey.

Always, Holt says, the same picture emerges. “There’s loneliness. They have a difficult time being connected to other people in the parish. They feel they have no control over their lives. And they’re trying to find some balance to their lives.”

Holt likes to give examples of people she’s known.

“There was one woman, a single parent of divorce, who’d been drifting away from the church for some time. She’s been kind of searching for answers and support from some friends, but they weren’t being very helpful.

“She was shocked at their anger and ridicule. These friends basically told her that you can endorse the church or you can choose us.”

After experiencing Raised in Faith’s ministry, the woman “found herself connected to the faith she’d lost long ago.”

Another woman, who became pregnant her freshman year of college, chose to have her child after considering abortion, then found herself “isolated from her friends, raising an infant.” She couldn’t connect to other single mothers and was “very insecure.”

“It’s a recurring theme among single parents. They don’t feel they belong. Single mothers, particularly, experience shame. How does the church look at that?”

In forming a local or parish-based ministry, the first step is to identify and respond to a real need. With compassion and creativity, both faith and community can be nurtured.

PREVIOUS: Pope Francis invites each of us to become missionary disciples

NEXT: You’re on a mission from God — get fired up like the early Christians