Cathedral Basilica to host Eucharistic Procession on Solemnity of Our Lord Jesus Christ, King of the Universe

Archbishop’s Lecture Series goes back to the Bible 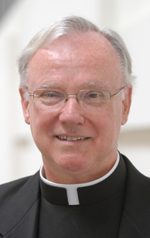 The new season of the Archbishop’s Lecture Series will kick off with a presentation on Father Raymond E. Brown, one of the most influential Roman Catholic biblical scholars in modern times.

The lecture, which is free and open to the public, will take place on Tuesday, Oct. 3 at 7:00 p.m. in the St. John Vianney Auditorium of St. Charles Borromeo Seminary, located at 100 E. Wynnewood Road in Wynnewood.

In his presentation, Father Senior will survey the growth and development of the study of sacred Scripture during the past half century. Father Raymond E. Brown was a pioneer in using critical and historical methods to examine biblical texts, following an initiative by Pope Pius XII in his 1943 encyclical “Divino Afflante Spiritu.”

Father Senior is the President Emeritus of Catholic Theological Union in Chicago, the largest Roman Catholic graduate school of ministry in the United States, where he is also a member of the faculty as a professor of New Testament studies. The author of numerous books and articles, he is the general editor of the acclaimed “Catholic Study Bible” (Oxford University Press, revised edition 2006) and editor-in-chief of the journal, “The Bible Today.”

For more information on this and other lectures in the series, please call the St. Charles Borromeo Seminary School of Theological Studies office at 610-785-6287.