Mass will mark 50 years of permanent deacons’ service in church 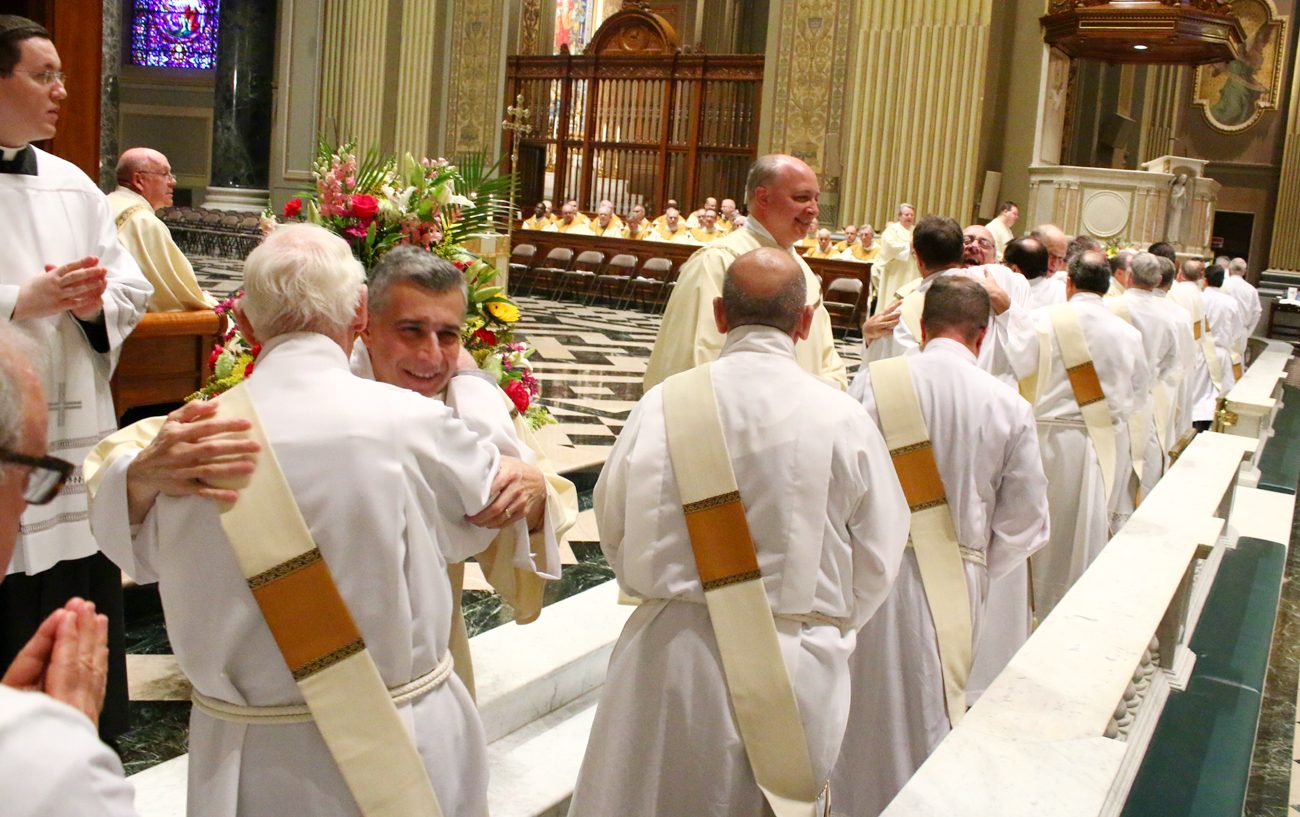 At the ordination Mass for permanent deacons of the Philadelphia Archdiocese on June 13, 2017, the newest deacons exchange a congratulatory fraternal kiss from their brother deacons. (Photo by Sarah Webb)

Permanent deacons and their families will gather on Sunday, Oct. 15 at the Cathedral Basilica of SS. Peter and Paul for an 11 a.m. Mass celebrated by Archbishop Charles J. Chaput in celebration of the 50th anniversary of the permanent diaconate and to renew their vows.

They will be joined by hundreds of other faithful at the cathedral to pray during the archbishop’s consecration of the Archdiocese of Philadelphia to Our Lady of Fatima during the Mass.

The diaconate, the third in rank of the three orders of ordained ministry (including bishop, priest and deacon), traces back to the ordination of St. Stephen and his companions, as it is related in the Acts of the Apostles. Early deacons assisted the apostles who were the first bishops in the distribution of food and charitable assistance to the poor.

The diaconate actually predates the emergence of the priesthood, but in time in the Western church it simply came as a step along the way to priesthood and survived as such in the transitional deacons usually ordained a year before priestly ordination.

But in a nod to the practice of the early church, Pope Paul VI restored the permanent diaconate on June 18, 1967. His apostolic letter “Sacrum Diaconatus Ordinum,” following up on the Second Vatican Council’s constitution “Lumen Gentium,” took note of the historic role of deacons.

Although general norms were issued by Pope Paul, he left it up to the various national bishops’ conferences as to how the diaconate would be implemented in their country.

Ministers of corporal and spiritual works

Among the norms of Sacrum Diaconatus was that training for deacons should be at least three years. In Philadelphia at this time, the period from initial contact to ordination is seven years including a year of application, a year of aspirancy and five years of formation.

One difference between the role of the deacon today as opposed to the early church is that it was then limited mostly to the corporal works of mercy. The modern deacon serves in many additional ways, for example assisting at liturgies, preaching, performing baptisms, catechesis, sacramental preparation and funeral services, just to name a few.

Unlike priests, most permanent deacons serve part time, and usually have other family and employment obligations.

Although Sacrum Diaconatus was issued in 1967, it wasn’t until 1971 that the U.S. Conference of Catholic Bishops issued guidelines for implementation in this country and it was not until 1977 that a program was established in the Philadelphia Archdiocese.

A first class was ordained in 1981 for service in the Hispanic community and a second class in 1982 for service in in the African American community. More permanent deacons have been ordained almost every year since. 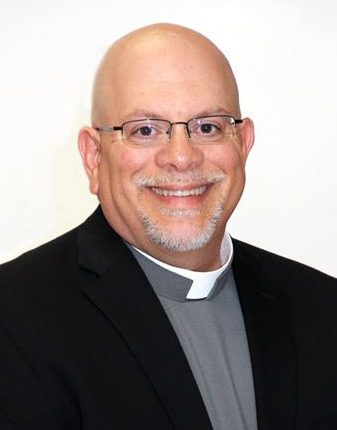 At this time, according to Deacon Michael Pascarella, the associate to the vicar for clergy, the archdiocese has an impressive 302 ordained deacons and almost 70 men in formation, counting from application to ordination.

Although men can technically join the program at age 28 for an ordination at 35, most tend to be married and older, perhaps when they no longer have small children.

The permanent diaconate is a life-long commitment and very few leave before age 75, except for family or health reasons, he said.

Training is intense, but necessary

The training period for the diaconate in the Philadelphia Archdiocese is more intense than most other dioceses. If the candidate has an undergraduate degree, as most do, the deacon formation program leads to a master’s degree comparable to the education of a seminarian to be ordained a priest.

“If they are going to preach on theological issues, especially today, they need to be as theologically, liturgically, spiritually and pastorally competent as is a priest,” Deacon Pascarella said. “We serve a different purpose with a different charism, and part of our charism is to teach and preach. We need to have that background.”

Some candidates do not have an undergraduate degree, and in those instances, they still take the same courses, but on a pass-fail basis rather than graded and they do not receive the degree. 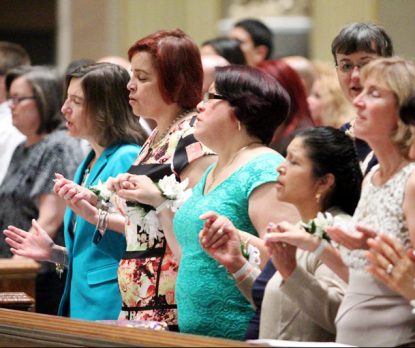 Wives of permanent deacons hold hands as they pray the Lord’s Prayer during a diaconate ordination Mass at the cathedral in June 2015 Sarah Webb).

In the case of married candidates, as most are, wives are fully integrated into the program even attending classes, in many cases. Their approval of their husband’s decision is essential. “Marital discontent is probably much lower than in the general population,” Deacon Pascarella believes.

Becoming a permanent deacon and living the vocation is not without sacrifice, but it has its rewards.

“I guess my personal satisfaction is when someone says I have made a difference in their life,” said Deacon Pascarella, who was ordained five years ago. Some aspects of ministry can be difficult. For example, he finds hospital visitation emotionally draining.

“I walk away emotionally drained but at peace because I was Christ to that family at that particular moment, just by stopping and praying with them.”

Deacon Jim O’Neill, who was ordained a permanent deacon in 2015 and serves at St. Christopher Parish in Philadelphia, did not enter the program until his youngest child, Katie, was in high school and he was ordained a month after her college graduation.

In the beginning he thought the formation program much too long. “After a time with good spiritual direction I realized the time was a gift,” he said.

With wife’s support, he’s a busy man in the church

His wife Mary, who is a nurse practitioner, was with him every step of the way, attending every class and meeting.

Retired from a career in printing paper sales, with Mary’s encouragement he took a position at St. Christopher as DRE and parish services director. He serves at daily and weekend Masses, he is in a program assisting couples in irregular relationships or seeking a decree of annulment or convalidation.

He makes Communion calls to parishioners and, with Mary, conducts Pre-Cana marriage preparation programs. He also serves in a rotation with Archbishop Chaput’s Sunday evening Mass at the cathedral and with bishops at ceremonies.

Deacon O’Neill also serves on the Deacon Bioethics Committee, which advises pastors and other clergy on handling typically end-of-life issues in parishes.

The deacon formation program “did a great job in preparing us for ministry,” he said.

Deacon Jack Betzal is a retired manufacturer’s representative who was ordained in 2004 and serves at St. Joseph Parish in Aston. He credits his former pastor, Msgr. Harry Degnan, for influencing his life.

He entered the Church Ministry Program in the 1980s but also waited until his youngest was in college before entering the permanent deacon program.

“It helped deepen my own spiritual relationship with God and enables me to help other people in different areas of their lives,” he said.

As a deacon he has a full plate. Within the week Deacon Betzal presided at the funeral for an elderly man, baptized two babies and prepared a couple for marriage, a ceremony he will perform. One day a week he works at the archdiocesan Tribunal.

“I taught CCD and sometimes kids will call me and ask for advice or help if they got in trouble,” he said. “I do the best I can to bring people closer to the Lord.”

Deacon Betzal credits his wife, Mary, to whom he has been married for 48 years come November for her full support.

“I’m the mouthpiece, she is the driving force,” he said. “I feel absolutely fulfilled.”

It is a sentiment shared by many of his brother deacons.

NEXT: Indian Catholics welcome new shrine for Mary in a day of devotions