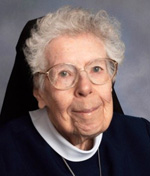 Sister Mary Damien O’Donnell, I.H.M., died Aug. 3 in Camilla Hall, Immaculata, at age 97. Born in Philadelphia, she entered the Congregation of the Sisters, Servants of the Immaculate Heart of Mary in 1941 from Seven Dolors Parish in Wyndmoor and professed her vows in 1944.

Sister Mary Damien taught various grades and music in the Archdiocese of Philadelphia and the Dioceses of Allentown and Harrisburg. She entered Camilla Hall in 2004.

Sister is survived by members of her religious community, her brother Rev. Msgr. John F. O’Donnell, and many loving nieces and nephews, grandnieces and grand-nephews.

She was predeceased by her parents, Henry and Bridget McCormick O’Donnell, her brothers, Henry, James, and Francis, and sisters, Patricia (Daniel) Flynn, Catherine (Edward) Greco and Alice (Edward) McCarthy.