Halloween and the Catholic Church: From holy to scary to pricey 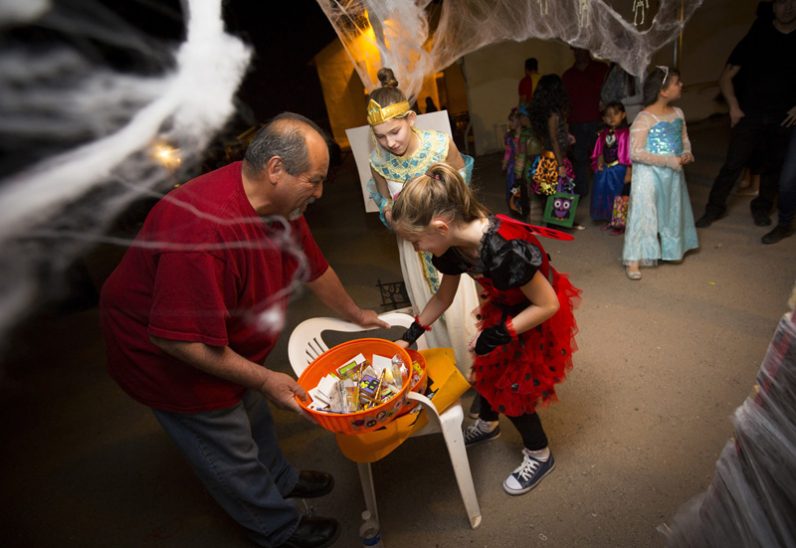 Children pick out treats during the Halloween carnival at Santa Cruz Catholic School in Tucson, Ariz., in this 2014 file photo. (CNS photo/Nancy Wiechec)

The medieval Catholic Church created the feast of All Saints on Nov. 1 to honor the blessed people who could not be included in the church’s formal list of saints. In England, the word “hallow” was used to mean the sacred, and thus there the day was All Hallows’ Day.

But also of great importance was the day before it, Oct. 31, which was a traditional pagan harvest feast day. Trying to counter pagan beliefs, the English Catholic Church called this day All Hallows’ Eve, which then became Halloween.

The new Christian day took over the pagan harvest festival, and the saints replaced — but not always! — the pagan fertility gods.

Furthermore, the saints substituted for the gods in warding off all the terrors — sprites, trolls, goblins — that roamed the world on All Hallows’ Eve. This was a popular day for medieval Christians.

But as Halloween moved into the modern era, the feast and the church had to deal with the earthquakes of the Protestant Reformation and then English attempts to stamp out the feast of All Hallows’ Eve.

Protestants insisted that they would be guided only by what was in the Bible, and they claimed that the cult of the saints was not there. All Saints’ Day and thus Halloween disappeared in many Protestant locales.

Yet people missed the traditional day, so the English created a substitute festival. On Nov. 5, 1605, British authorities arrested and later executed several English Catholics accused of trying to blow up the Houses of Parliament.

One was named Guy Fawkes, thus generating a raucous festival known in England and thus in the British American colonies as Guy Fawkes Day, a substitute for the “Catholic” Halloween.

This new day was popular in the Colonies, but during the Revolution, George Washington feared that the celebration’s blatant anti-Catholicism would offend the rebels’ French Catholic allies.

After the Revolution, Guy Fawkes Day declined, while Halloween would triumph in the United States, which officially separated church and state. Many immigrants had been persecuted in Europe, and so they loved the freedom to celebrate their own religious holidays.

Halloween was observed by the few Scottish immigrants but especially by the millions of Irish (most of them Catholic) who came to the U.S. They kept their traditions but also changed some, for example, carving scary faces in pumpkins rather than turnips as back in the old country, thus creating jack-o’-lanterns.

Some American Protestants, especially farmers, had also kept some of the old traditions associated with the harvest.

The rise of Halloween also helped meet America’s need for holidays since the Colonial ones (e.g., feast of St. George, the patron of England!) did not survive the Revolution.

Unfortunately, another tradition, anti-Catholicism, had also crossed the ocean, and Catholic traditions were not always welcome. But as the immigrants became Americanized, their traditions became accepted.

For example, many conservative Protestants refused to celebrate Halloween, but as Irish, Polish, Slavic, Italian and Germanic Catholics did so, more and more of their fellow citizens accepted it.

Today, only fundamentalists oppose the day on the grounds that its focus on witches and ghosts opens innocent children to demonic influences.

The contemporary church has no official position on the celebration of Halloween since its religious character is largely gone. Now people just smile at children dressed as demons and monsters. Rectory doors have been known to be open for trick-or-treaters, and Catholic schools put up Halloween decorations.

Church leaders have, however, lamented the holiday’s dominant and relentless commercialization that, as always, takes a toll on impoverished children whose parents cannot afford costumes or bags of candy to give away. The clergy stress helping poor children on this day.

Finally, clergy will remind believers that, no matter how secular it has become, Oct. 31 is the eve of a holy day, and some recognition of that is not out of place.

PREVIOUS: The Lord hears the shriek of the newborn

NEXT: Our response to suffering, before the end