Join a ‘life-changing trip’ to the land where Jesus walked 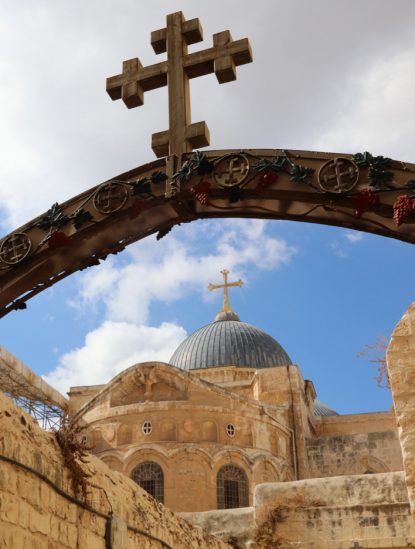 Where is the heart of the Christian world? Rome is important of course, that is where the pope has his headquarters. But the true heart is in the Middle East, in Israel, the Holy Land where Christ founded his church.

One would think every Christian of every denomination at one point or another, if possible, would make a pilgrimage to the sacred ground where Jesus walked.

Think about it – Bethlehem, Nazareth, Cana, the Jordan River, the Sea of Galilee, Jerusalem and stops in between.

The Archdiocese of Philadelphia is sponsoring such a pilgrimage next February, leaving Feb. 1 and returning on the 11th. That may be the heart of winter in Philadelphia, but it is just jacket weather, 40 to 50 degrees, in Israel.

The agency conducting the tour is Select International Tours, the same agency that conducted a similar archdiocesan Holy Land pilgrimage in March 2011. Leaders of this tour are Father Dennis Gill and Father Zachary Navit, both of whom are experienced visitors to the Holy Land. Also among the pilgrims will be Bishop Michael Fitzgerald.

“I found it a life changing experience when I visited,” Father Navit said.

The cost for the trip is $3,695 double occupancy, which is fairly reasonable considering just about everything including most meals is covered. There is a single occupancy supplement of $795 as well as a charge if one uses a credit card.

The starting point is the Archdiocesan Pastoral Center next to the Cathedral for a bus ride to Newark Airport and a direct flight to Tel Aviv, which is the main international airport in Israel. The flight leaves at 11 p.m. and arrives at 4:20 p.m. the next day. No, it isn’t a 17-hour flight; there is a seven-hour time difference between Philly and Tel Aviv.

From Tel Aviv the group will travel to a hotel near the Sea of Galilee for a Mass and dinner at a hotel.

The next few days will be in the area around Galilee, which many pilgrims consider a real highlight because the sea and shore are timeless, looking much as they did 2,000 years ago. There will be a boat ride on a vessel similar to those used in the time of Jesus, as well as a stop to view the remains of an actual boat from that era that was recently recovered from the sea.

There will be stops at Capernaum, which figured so much in the public ministry of Jesus as the home town of many of the apostles and the site of many of his miracles. Also, there will be a visit to Nazareth where he was a child. A stop at Cana is a must because this was where Jesus performed his first public miracle.

A visit to Mount Carmel is of importance, although not biblical. It is the birthplace of the Carmelite order.

Also there is Caesarea on the Mediterranean coast, the major port for the Romans who ruled Judea in the time of Jesus. The ruins of an amphitheater and an aqueduct are as impressive as you will find anywhere.

Bethlehem, with the Church of the Nativity and Manger Field are a must, although as with so many early Christian sites, they have no resemblance to what they were at the time of Jesus. Today, we try to preserve historical sites exactly as they were, while our pious forefathers built churches directly on the sites.

While in this area the pilgrims will break down into smaller groups to share at the home of a Christian family. All through the pilgrimage, as much as possible, Christian hotels, Christian guides and Christian restaurants will be used as a way of supporting the Christian community which is diminishing all through the Middle East, including Israel, according to Father Navit.

There will be a stop by the Jordan River at Qasr el Yahud, which is widely considered the baptismal site of Jesus, either near the Israeli side or directly across near the Jordanian side. It doesn’t matter, the Jordan is not wide and the same water flows by both. It is truly holy ground.

On the ninth day there will be visits in and around Jerusalem, the Temple Mount and the Wailing Wall and the sites where Jesus suffered, died, was buried and rose again.

From a chronological point this would include the triumphant path Jesus rode on Palm Sunday, the site of the Upper Room and the Garden of Gethsemane, where he prayed. Strikingly many of the olive trees, which can have extremely long lives, may be the same trees that witnessed the Agony in the Garden. 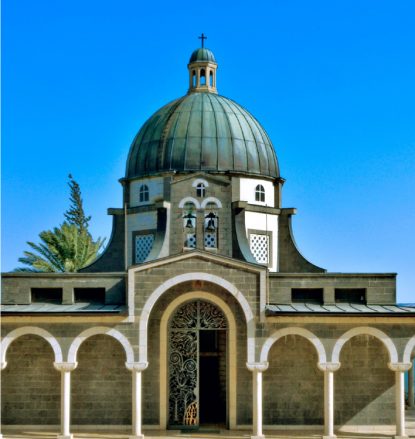 Also visited will be the site of Jesus’ trial and the path he walked to his execution as memorialized in the Stations of the Cross and his burial. The stations are usually done very early in the morning because during the rest of the day the area is a bustling Arab marketplace.

The last day will include visits to St. Anne Church, the pools in Bethesda, Mass in Ein Karem where traditionally Mary visited Elizabeth and John the Baptist was born. Also a must is Emmaus where the Risen Christ broke bread with disciples after the Resurrection.

A final stop will be a farewell dinner in Jaffa, the oldest part of Tel Aviv on the Mediterranean coast.

These are just a sampling of the many, many sites that make a Holy Land pilgrimage a life-changing event for Christians.

For more information contact Select International Tours at 800-842-4842 or susan@select-intl.com.

Also an information night conducted by Father Navit will be held on Thursday, Oct. 19 at 7 p.m. in the Community Room of St. Mary Center for Healthcare and Rehabilitation, 701 Lansdale Avenue, Lansdale.

NEXT: Seeing the changes of 175 years, St. Peter Parish still welcomes all