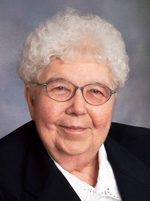 Born in Philadelphia, Sister Joan entered the Congregation of the Sisters, Servants of the Immaculate Heart of Mary in 1951 from St. Bartholomew Parish, Philadelphia and professed her vows in 1954.

She taught and was principal in elementary schools in the Archdiocese of Philadelphia and the Dioceses of Allentown and Atlanta, and she also served as a counselor in secondary schools in which she ministered.

Sister Joan’s last assignment before her mission in the Apostolate of Prayer in Camilla Hall was as an office assistant at St. Hubert High School.

The funeral Mass was celebrated at Camilla Hall on Oct. 26.

In addition to her congregation, Sister Joan is survived by her sister Mary McBride, sister-in-law Scherle (Joseph) Connell and many loving nieces, nephews, grandnieces and grand-nephews.