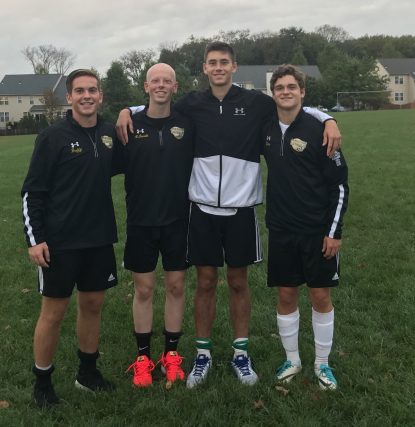 This is the time of the year when many teams are in must-win mode.

While the upper echelon has already secured a spot in the postseason, a handful of other programs are hoping just to make the playoffs.

Because in the playoffs, one never knows what might happen.

“At one point, it looked like it wasn’t happening for us,” said Conwell-Egan boys’
soccer coach Barry Roxberry. “Then we started playing better, and then we starting
getting results. You always hope it’s not too late.”

Conwell-Egan is one of two teams to come out of nowhere to make Catholic League soccer quite interesting.

Heading into their regular-season finale 1 pm Saturday against visiting St. Joseph’s Prep, the Eagles’ last three games included a scoreless tie with Cardinal O’Hara, a 1-0 upset of Father Judge, and a 2-1 double-overtime victory over Bishop McDevitt.

“We have a good squad of boys that work hard,” said Leible. “It’s been a tough season up until now, and until recently, we haven’t had the results we’ve wanted. The past few games just fell together and we’re looking to continue our late-season push.”

Two of Leible’s goals have been recent game winners. He supplied the only tally in the win over Judge — the first time C-E has bested the Crusaders in 12 years — and he booted the sudden-death clincher versus McDevitt.

“I believe you’re only as good as your last performance,” said Leible. “That being said, (the overtime winner) was a huge moment for me and the team. We knew we had to win to continue our season and I was able to help do that, so it was a special moment for all of us.”

Last week, Lansdale Catholic shocked the entire local soccer world when it tied La Salle, 1-1. The Crusaders had entered the contest with a 2-5- 1 record as opposed to La Salle’s 8-0. Lansdale Catholic followed that effort by tying fourth-place Archbishop Ryan, 1-1.

Against defending champion La Salle, no one had given LC a shot, no pun intended.

But trailing 1-0 with 10 minutes remaining in regulation, senior Chris Edling took a pass from junior Matt McDonald and tied the game. Senior goalie Joe Duffy and his defense, led by senior Dan White, preserved the tie all the way through two overtime periods.

“That game could turn the season for us,” said Edling. “We came into the game with the thought of giving it our all and executing our game plan. They are a great team and have a ton of talent.”

“It proves that in the Catholic League, any team can give you a game if you don’t show up ready to play,” said Werner. “This past week has definitely sent that message throughout the whole league.”

Field hockey standings too close to call as playoffs near

With the final week of the season approaching, the standings are close.

Bonner-Prendergast is in first place at 6-0, followed by Archbishop Carroll, Cardinal O’Hara, and Archbishop Wood all tied for second at 6-1. Teams five through seven — Little Flower, Lansdale Catholic, and Archbishop Ryan — are deadlocked at 3-4.

Six teams will qualify for the playoffs. Quarterfinals take place October 27. The top two teams receive bye,s while seeds three through six do battle. The semifinals are scheduled for October 30, and the championship will be on either Nov. 1 or Nov. 2 at Neumann University.