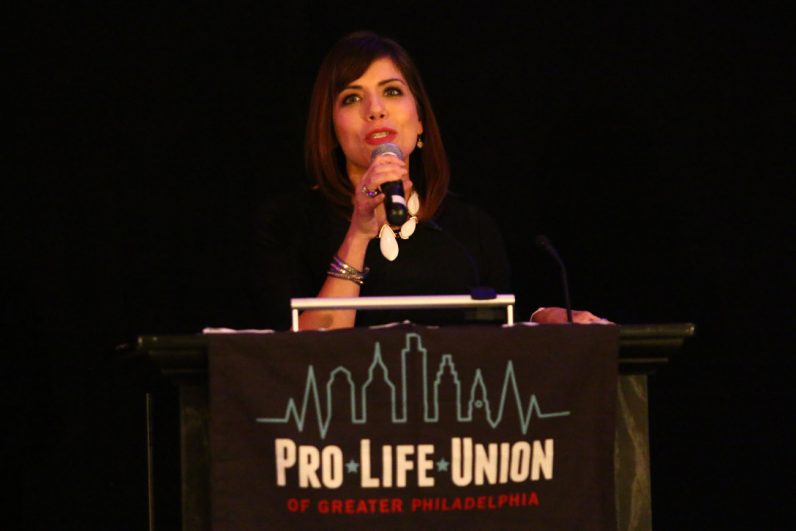 Melissa Ohden tells her life story and encourages participants at the annual Stand Up for Life dinner by the Pro-Life Union of Greater Philadelphia Nov. 19 in Philadelphia. (Photo by Sarah Webb)

Melissa Ohden, who was the featured speaker at the Pro-Life Union of Greater Philadelphia’s Stand Up for Life Dinner held at the Sheraton Philadelphia Downtown Hotel on Nov. 19, should not have been there.

She should never have been born, at least that was the plan.

Ohden was a mistake, the result of an abortion gone awry at an Iowa hospital 40 years ago. Listening to this poised, intelligent woman hold at rapt attention an audience of more than 1,000 at the dinner, one had to wonder, how many thousands or millions of other equally wonderful people were never born because the abortionist was more adept at his trade?

Her biological mother was a 19-year-old college student when she had her unplanned pregnancy. “She was coerced to have an abortion. It was literally forced upon her,” said Ohden, who spent years tracking down the details of her birth.

Coercion is very often involved, and in this case it was not the young man her mother was dating, it was her own mother, Ohden’s birth grandmother. She was a professor of nursing who had trained many of the nurses in the hospital where the attempted abortion took place.

The saline infusion method chosen for the abortion is little used today. A saline solution was injected into the amniotic sac to slowly poison the baby which would then be delivered dead.

The process for Ohden took much longer than usual, probably because her mom was further along in the pregnancy than was believed. If was only after the procedure was completed that the nurses noticed the infant was gasping for breath.

Too often when this is the case, the infant is placed in a small room or closet and left until breathing stops.

This is what Ohden’s grandmother insisted should happen. But the nurses took it upon themselves to take the baby to the neonatal intensive care unit, where everything possible was done to save her. Not much hope was held out that she would survive and if she did there might be multiple disabilities, but survive she did.

Ohden’s mom was never told the abortion had failed and she went home fully believing her child was dead. Somehow adoption papers were signed with the mother’s name forged and when Ohden was sufficiently recovered with no lasting residual effects she was taken home by loving adoptive parents.

They told her she was adopted as was an older sister in the family, but withheld the circumstance of her birth, explaining her birth parents had made a courageous decision to put her up for adoption. They reasoned the truth would be too horrible for her to bear.

When Ohden was 14, her older sister had an unplanned pregnancy and their adoptive parents told her of Melissa’s birth, only to dissuade her from considering an abortion herself.

Ohden’s sister did not have an abortion but shortly after blurted out the truth to Melissa. For a time it was as truly devastating as her loving adoptive parents thought it would be.

After she recovered from the shock and survivor’s guilt she was determined to find her birth family, and although the records were officially sealed, she ultimately found one where the names of her birth parents was not blacked out. She ultimately established contact with several of her birth relatives including her mother, who harbored feelings of guilt for more than three decades over the child she thought was dead.

“My biological mother spent 30 years in sorrow,” said Ohden, who has forgiven those responsible for the attempted abortion, even her grandmother, because “that’s what Jesus calls us to do,” she said.

She herself is now a married mother and her first child was born in the same hospital where the abortion was attempted.

“God intended me to know, and God called me to share my story, and I will fight for the children,” she said, urging the women and men at the dinner to also keep fighting. “You can make a difference,” she said.

Also at the dinner, the annual Defender of Life Award was given to ob-gyn doctor Monique Ruberu, who coordinates Forty Days for Life in Philadelphia.

The John and Harriet Stanton Young Leader Award was given to Carly French for her active pro-life support as a student, first at Bishop Shanahan High School and now at Temple University.

The St. John Paul II Be Not Afraid Award was given to James Wood, a Philadelphia detective whose work was critical in the criminal conviction of Kermit Gosnell, the operator of the Women’s Medical Clinic in West Philadelphia where numerous illicit late-term abortions were performed.

Also at the dinner it was announced that Tom Stevens, a married father of five and member of St. Colman Parish in Ardmore, has been selected as the new executive director of the Pro-Life Union of Greater Philadelphia. He succeeds Edel Finnegan, who is stepping down after years of distinguished service to the pro-life cause.