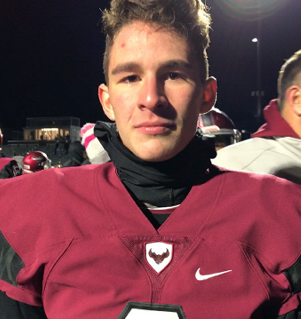 It was a rather simple assignment and it took just a few seconds, but it spoke volumes.

From the La Salle two-yard line, Duell took the snap and handed off to sophomore Kolbe Burrell, who pounded into the end zone to provide the Hawks a lead they never relinquished.

A victory would increase their two-year winning streak to 25 games and, more importantly, catapult the 10-0 Hawks into the PIAA Class 6A state tournament, which they have claimed three of the past four years.

“C.J. is a hard-working and talented young man who demonstrated great poise in that situation,” said Infante. “He was able to keep the momentum for us on a frigid night without so much as the littlest glitch on that play.

“You can’t underestimate the importance of his ability to get us lined up and handle the ball on both exchanges between him and the center and the running back. It’s a tougher play than some might think, and the fact that it’s an afterthought shows what a good play it was on his part.”

Teamwork and unselfishness is constantly preached by the Prep coaches, and in the victory over La Salle, it certainly took a collective effort to move past the rival Explorers.

While the offense produced uncharacteristically lukewarm numbers (it had averaged 35 points over the first nine games), the defense supplied near total domination, holding the Explorers (7-4) to only 151 yards and their fewest points since being shut out by North Allegheny, 21-0, in the 2010 state championship.

“We emphasized tackling,” said senior linebacker Phil O’Connor, one of the game’s unofficial Most Valuable Players. “We had to keep wearing them down.”

Senior defensive lineman Ryan Bryce said the cold weather affected both offenses, particularly the Prep, which dropped a few passes, including a perfect toss into the end zone.

“Coming in 3-3 at half, (the mindset is that) defense wins the game,” said Bryce. “We had a lot of good stops. We knew we had to stop the run and fortunately we did.”

After La Salle senior Dan Karrash and Prep senior Anthony Tigano traded field goals from 37 and 30 yards, respectively, the Prep took its first lead with 3:32 left in the third quarter on Burrell’s aforementioned two-yard run. With 11:34 remaining in regulation, the Hawks added insurance when McCray pushed forth from the one-yard line.

McCray’s running ability wore down the Explorers. His 85 yards on 15 carries included several backbreaking first-down hauls, one of which occurred on fourth and two from the La Salle 22 and eventually resulted in Tigano’s successful boot.

“We have nothing but respect for La Salle,” said senior linebacker Brad Cobaugh. “They’re a great program. It’s always fun playing them. It’s a great tradition. It was real good fight. A real good defensive battle was going on. It was great to come out on top.”

O’Connor said the Hawks will never rest on their laurels.

“After every game we have a ton of things to get better at,” said O’Connor. “We aim to get better at those things during practice the following week so they are fixed for the game.”

That qualifies as bad news for Northeast High School.

PREVIOUS: Turning out the football lights this fall? Not so fast