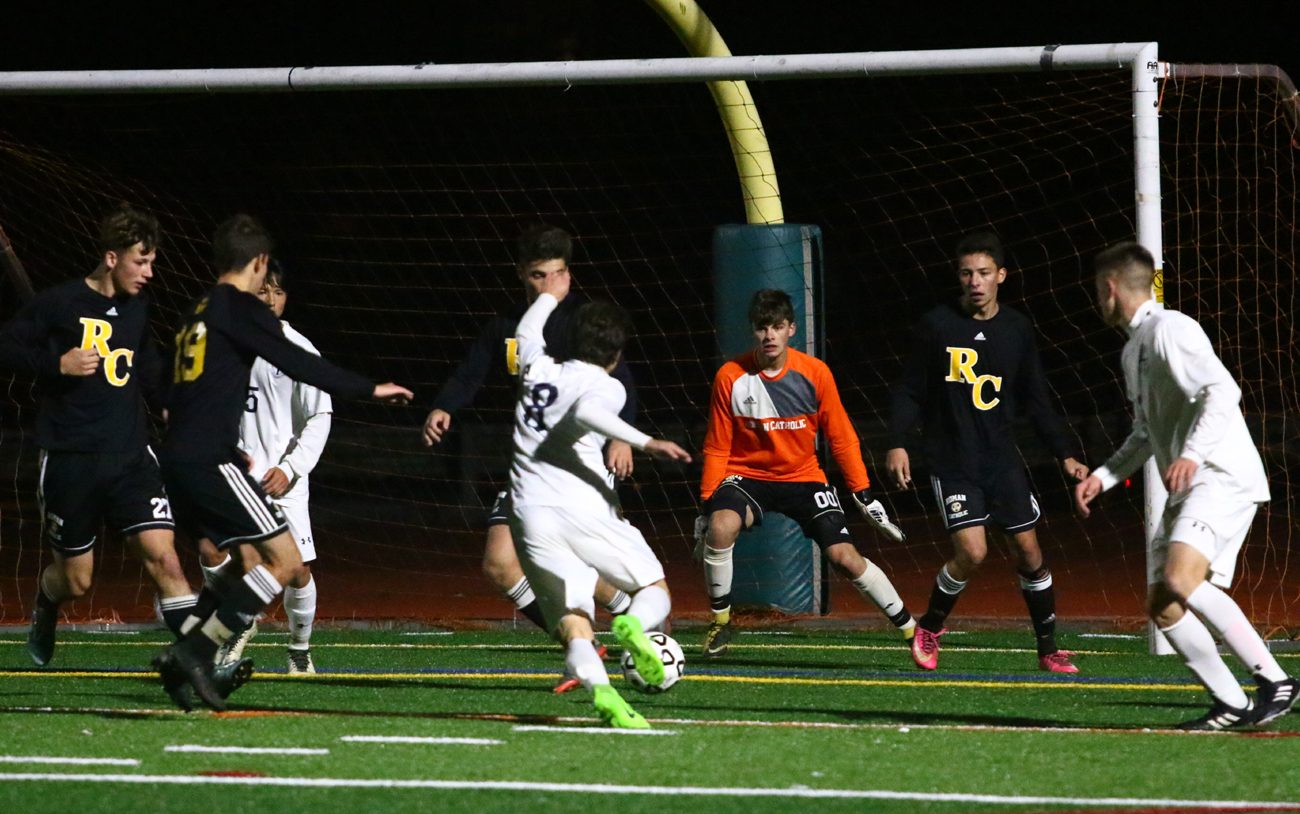 La Salle's Jacob Mittman goes in for a shot against Roman Catholic during the Catholic League final Oct. 30. (Photo by Sarah Webb)

When the soccer season began in earnest, La Salle High School had one goal in mind, and it was a doozy.

On Monday night, Oct. 30 at Northeast High School, the Explorers reached yet another pinnacle. When their 1-0 victory over rugged Roman Catholic was over and the players raced toward each other near centerfield, it was part euphoria, part relief.

(See a photo gallery of scenes from the game here.)

That’s putting it mildly. La Salle’s lone blemish during the Catholic League regular season was a 1-1 tie with Lansdale Catholic. Among La Salle’s victories was a 3-0 decision over Roman Catholic – the Cahillites’ only league non-victory – on Sept. 29. There was no way, however, that the championship would be decided by such a wide margin.

Sure enough, after a very chippy first half that actually paled in comparison to the final 40 minutes, La Salle senior Jacob Mittman scored from deep inside Roman territory with 9:29 remaining in regulation.

Asked later to describe the most important tally of his career, Mittman needed to summon a couple of nearby teammates to piece together all that occurred leading up to the ball falling behind Roman’s outstanding sophomore goaltender, Kevin Tobin.

The game was really that close.

“We fought all game,” said La Salle senior Bobby Bohner, whose sliding stop in double overtime against St. Joseph’s Prep in the league semifinal preserved La Salle’s season. “I was unsure at times. Roman played a great game. But we finally got numbers in the box and got that one. That was a big relief, but it wasn’t over after that. They had a lot of chances, but luckily, we were able to hold them off ‘til the end.”

“If you treat each one individually, it takes the pressure off a little bit,” said third-year coach Tom McCaffery. “It’s tough to compare teams. The groups were so different. They both did the job. This one was very difficult. Roman played a very, very good game, probably the best competition we’ve seen all year.”

Roman Catholic, which won the league title in 2015, was playing in its fourth consecutive championship. A squad loaded with underclassmen, the Cahillites (15-6) are primed to return to the finals next year.

But this one stings.

“First off, congratulations to Tommy and his team on a great season,” said 11th-year coach Ray DeStephanis. “As for us, I’m proud of our boys. They gave the effort and played the match they needed to in order to win the game. If we drop one in early, maybe we are singing a different tune right now.

“It’s a very tough spot to be in going down on a goal like that so late in a title match and expect a good result. Still, we collected ourselves and battled fiercely until the very end. I guess it just wasn’t in the cards for us tonight.”

As the state tournament approaches on Tuesday, the Explorers are hoping to have more success than last year, when they were ousted in the first round.

“Nobody wants this season to end, especially our seniors,” said junior Chris Metzler. “We have lot of hard work still to do.”