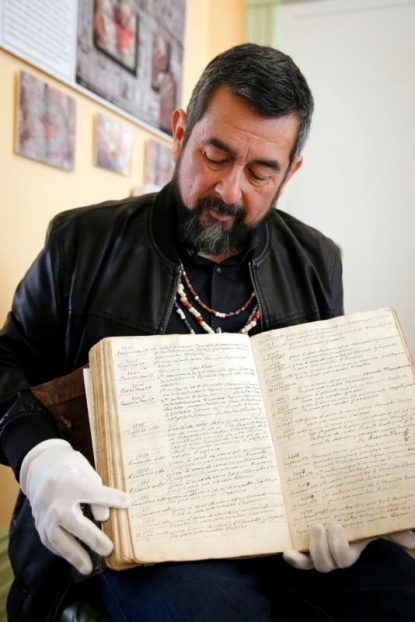 Andrew Galvan points to the entry for his great-great-great-great-grandfather in an early baptismal registry for Mission San Francisco de Asis, also known as Mission Dolores, in San Francisco May 19, 2015. There’s a good reason to celebrate our baptism. It’s our church birthday — the day when we were born into the light of Christ. (CNS photo/Nancy Wiechec)

In a society known for celebrating just about anything — July 1 is International Joke Day and there are two National Doughnut Days — it’s a bit surprising that more Catholics don’t commemorate their baptismal day.

Many of us don’t know exactly when we were baptized, especially if we were babies when it happened. Instead, our baptismal date becomes a piece of family trivia or something that’s unearthed when preparing for another sacrament, like marriage.

But there’s a good reason to celebrate our baptism. It’s our church birthday — the day when we were born into the light of Christ. And celebrating that milestone is exactly what Pope Francis has called us as Catholics to do — several times, in fact, and most recently during an Aug. 2, 2017, general audience.

“We are born twice over: the first time into natural life; the second, thanks to the encounter with Christ, at the baptismal font,” he said in his catechesis. “If we are true to our baptism, we will spread the light of the hope — baptism is the beginning of hope, that hope — of God, and we will be able to pass on to future generations the meaning of life.”

Baptisms have always been a big deal for Martin Buganski and his family, who marked the day with presents, a special dinner and dessert. With seven children, being able to pick out the family meal is a pretty big deal, but the most significant part actually came after everyone finished eating, Buganski said.

That’s when the family would go around the table and share a few words about how they believed the person of honor was living up to their baptismal promises. Buganski’s family calls it “honoring,” and they still try to keep this part of the baptismal celebration when possible.

“It’s such an affirmation, and in general, we are not used to accepting affirmation,” said Buganski, 24, a mission leader for St. Paul’s Outreach at Seton Hall University in South Orange, New Jersey. “To have somebody saying out loud the good things about you, and who you are choosing to be, and how you are responding to that baptismal grace, you feel great. You feel fantastic afterward.”

Now that he is older, Buganski isn’t always home for a family dinner. Instead, he attends Mass and goes to confession on his baptismal day. And he’s tried to share the practice of honoring while working as a missionary.

“There are seven of us on the team, and not everybody on the team knows their baptismal day,” he said. “We celebrate birthdays and we’ve taken time to honor them. There’s something so powerful for us as Christians. We may think good things about other people, but we don’t speak up until it’s something we don’t like about them.”

When Amylee Udell was asked to be a godmother, she deeply pondered her responsibilities helping another Catholic to grow. She wondered what her role could be, especially with distance and her own family to raise. In saying yes, she decided to make her goddaughter’s baptismal day one worthy of recognition. Each year, she sends a card or gift to mark the day.

“Without seeing me regularly, she’d know someone out there recognized her as Catholic and a child of God,” said Udell, of Albuquerque, New Mexico. “Someone thought that one particular day was special enough to remember each year. Someone out there agreed to be there if she had questions or doubts.”

In his audience, Pope Francis said that celebrating our baptism helps spread Christ’s light. He actually likened the spread to an infection, but it’s powerful to think of our lives — through our baptism — as helping to illuminate the word of God.

Celebrating our baptismal day helps place our faith in the context of our life. Buganski recalls his response when finding out the feast day of St. Teresa of Kolkata is Sept. 5.

“I immediately made that connection — that’s my baptismal day,” he said. “It’s an instinct.”

PREVIOUS: Let the children come to me

NEXT: Why baptism is no mere formality