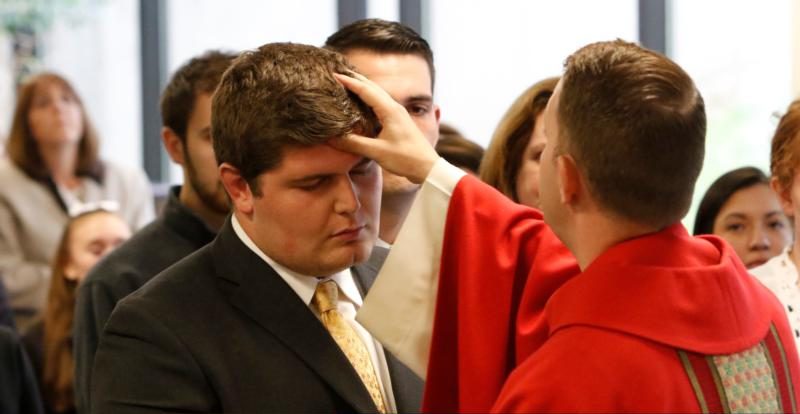 Graduating senior James Trull of Bellevue, Wash., is anointed with sacred chrism by campus chaplain Father Gregory Rannazissi during his confirmation May 14, 2016, at Hofstra University in Hempstead, N.Y. In the coursework needed before confirmation, classmates frequently support one another in their common journey to become better Catholics, better Christians and better human beings. (CNS photo/Gregory A. Shemitz)

If there was anything that I did not anticipate doing during my freshman year of college, it was receiving the sacrament of confirmation. As an atheistically inclined, confirmation class dropout, I wanted nothing to do with Christ or his church, even if Christ and his church wanted something to do with me.

Attending a couple dozen catechesis classes and professing my belief in the Catholic Church was not something I ever expected to do. It was not on my radar. For that matter, it was not on anybody’s radar. Luckily enough, it was on God’s radar and that, in the end, was the only radar that mattered.

Arriving at a non-Catholic university in the nation’s capital, I quickly found myself immersed in a world that offered me the objects of my avarice, gluttony and lust. It overflowed with everything that I thought that I loved and would make me happy.

It promised me everything and, as I was loath to discover, left me with nothing. This world was rudely interrupted when, on a sunny Saturday morning, a Baptist missionary knocked on the door of my hobbit-hole and invited me to his church.

Accepting his invitation out of politeness, I quickly found myself introduced to a world that offered me faith, hope and love. It overflowed with everything that I thought I hated and would make me miserable. But it gave me everything. This world was expanded when, on a brisk Friday afternoon, a spirit from God knocked on the door of my interior hobbit-hole and invited me back to the Catholic Church.

I soon found myself in a Newman Center, confessing my sins to a priest I had never met and attending Mass for the first time in a long time. Absolved from my sins and fed by the Eucharist, I was hooked on what Bishop Robert E. Barron calls the “Catholic thing.” I signed up for Rite of Christian Initiation of Adults (RCIA) classes without regard for my Wednesday nights. I had no idea what I was getting myself into.

There were, in fact, many students who had stories that were similar to mine. My class was filled with confirmation class dropouts who had come to desire Christ and his church.

As members of a family, we supported one another on our common journey to become better Catholics, better Christians and better human beings. We helped each other to prepare the way for the helper of us all, the Holy Spirit.

By the time RCIA classes came to a close and the Easter Vigil finally arrived, I was ready. I was ready to renew my baptismal promises. I was ready to turn my back on Satan and to turn more fully toward God. Saying no to Satan and yes to God, my fellow confirmandi and I were branded, in a real way, with the yes of Jesus.

PREVIOUS: Confirmation strengthens our identity as children of God

NEXT: Anointing with holy oil: Consecration and promise, from Moses to Jesus