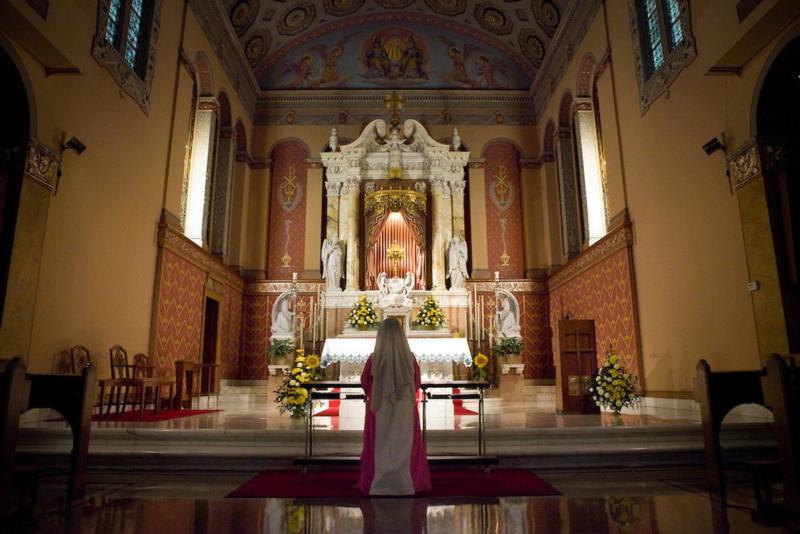 A sister prays in front of a monstrance in the chapel at Mount Grace Convent, home of the Sister Servants of the Holy Spirit of Perpetual Adoration (known as the “Pink Sisters” because of their rose-colored habits) in St. Louis in 2012. Eucharistic adoration has been a Catholic worship practice for nearly 1,000 years. (CNS photo/Lisa Johnston, St. Louis Review)

Eucharistic adoration has been a Catholic worship practice for nearly 1,000 years. Perpetual adoration, where the Eucharist is exposed 24 hours a day, is not usually done in individual parishes, but rather practiced by religious communities “and other pious associations,” according to “Holy Communion and Worship of the Eucharist Outside Mass,” No. 90.

The Real Presence Eucharistic Education and Adoration Association provides a website  that directs the faithful to perpetual adoration chapels across the United States.

The practice of eucharistic adoration has been making a gradual comeback since nearly disappearing after the Second Vatican Council, says Sister Joan Ridley, superior of the Benedictine Sisters of Perpetual Adoration monastery in Clyde, Missouri, and author of the book “In the Presence: The Spirituality of Eucharistic Adoration.”

“My religious congregation began in America in 1874, from Switzerland. Our foundress, Mother Mary Anselma Felber, found that in America, nuns and monks were asked to teach and run orphanages for immigrant populations. While doing that, she believed that the people of America most needed prayer, specifically eucharistic prayer and adoration.

“As soon as feasible, the pioneer sisters began perpetual adoration of the Blessed Sacrament, exposed on the altar.”

Vatican II emphasized active participation in the sacraments. Following the council, “eucharistic adoration seemed to disappear from the church’s life,” she observes. “My religious order stopped perpetual adoration and began to also focus on adoration of Christ in the persons around us, as St. Benedict set forth in his fifth-century Rule.”

Adoration gained popularity in the 1980s among religious and the lay faithful.

“Sometimes certain days of the week, sometimes perpetual,” she reports. “My monastery in Tucson, Arizona, has had the Blessed Sacrament exposed most daytime hours of most days, with the laity joining the sisters for periods of adoration.”

“People hunger for quiet and solitary times of eucharistic prayer, in addition to the celebration, which is a verbal and communal expression of worship.”

The Mercedarian Sisters of the Blessed Sacrament in Cleveland, Ohio, have a teaching apostolate. But Sister Jeanette Marie Estrada observes, “It is an education that finds its source in the eucharistic presence of Jesus. We want our pupils to be enamored of Jesus in the Eucharist, to the point that every science, every event be seen through this lens.”

The Mercedarian Sisters were founded in Mexico City in 1910 by Maria del Refugio Aguilar, whom Pope Francis declared “venerable” in 2015, advancing the cause for her sainthood. In the organization’s constitution, “she tells us that we are to attain perfection ‘loving, in the most intense way, our sweet Lord in the Blessed Sacrament.'”

Sister Jeanette agrees with the power of quiet prayer and solitude, comparing visiting Jesus in the Eucharist to “going to the beach and getting tanned. When you are at the beach enjoying playing in the water, you do not feel that you are tanning, but what about the next day? You not only look darker, if you were not cautious, you even feel it.

“Well, Jesus is our sun. When you are spending time with him, you do not have any idea of the beautiful work of art that Jesus is performing in your soul, the embellishment that your whole person is getting; but it is happening.”

Quoting Luke 12:14, a favorite passage of her mother foundress in which Jesus says, “I have come to set the world on fire,” Sister Jeanette advises, “Go tan your soul under the divine sun. Do not be afraid to get burned, do not be afraid to become a ball of fire of love.”

PREVIOUS: On the issue of stipends, don’t ask how much a Mass ‘costs’

NEXT: In the Eucharist, we become what we receive