Been away from confession? God’s mercy still calls 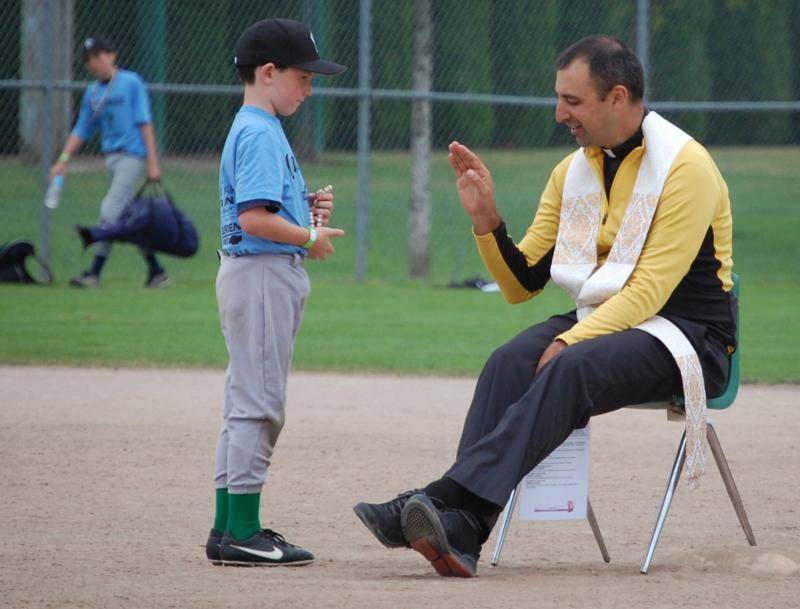 Father Bryan Dolejsi, vocations director for the Archdiocese of Seattle, hears a boy’s confession in Kent, Wash., in this July 22, 2014, file photo. Today, reconciliation is one of the least practiced sacraments, but for many adults who return to it, it can be a powerful way to grow in faith and encounter God in a profoundly merciful context. (CNS photo/Jean Parietti, Northwest Catholic magazine)

For many baby boomers and other Catholics, the childhood experience of reconciliation was “old school” — a daunting, opaque confession of transgressions in an anonymous, confining confessional capped off with a recital of the act of contrition.

Today, reconciliation is one of the least practiced sacraments, but for many adults who return to it, it can be a powerful way to grow in faith and encounter God in a profoundly merciful context.

Two examples of Catholics who fell away from the sacrament and returned to it as adults offer insight into some of the issues that might hold others back from fully benefiting from receiving the sacrament.

Holly Clark’s early experience with reconciliation was marked by the sometimes-misunderstood events around the edges of the Second Vatican Council. She said, “I grew up in the post-Vatican II vacuum. My mother remembered the priest saying, ‘They’re doing away with confessions.’ So, after that, we didn’t have a focus on confession.”

By the time she entered a master’s program at St. John XXIII Seminary, certain aspects of the sacrament had changed drastically, but it certainly had not “gone away.” Confession could be face to face and not spoken into an opaque grid, and the emphasis was on having a conversation with the priest, instead of reciting a laundry list of transgressions large and small.

To Clark, these changes were welcome. “I always felt silly saying, ‘I did this five times, I did that five times,'” she said.

But it wasn’t until an Advent penance service that fear rooted in her childhood experiences could be dispelled.

“I don’t memorize things well,” she said. “I was afraid of getting yelled at for the act of contrition. I sat there as others lined up and I kept thinking, ‘They’ll know if I don’t go.’ Finally, I decided, ‘I’ll throw myself upon the mercy of the court.’ I picked out the priest who was the most understanding. He was very kind. He didn’t even ask me to say the act of contrition! He said, ‘Are you sorry?’ and I said, ‘Yes, I’m sorry.'”

Clark, who is disabled with multiple congenital deformities, is now a pastoral associate at Cranberry Catholic Collaborative, Massachusetts. She said, “I realized that part of my fear was that I was coming to an adult understanding of the sacrament.”

Deacon Michael Bellinder’s parents advocated weekly reconciliation. After four years in high school at a seminary, though, he said, “I kind of fell away. In college, we had wild parties. Those were the kind of things you didn’t want to have to confess week after week, so I stopped going.”

Married at 22, Bellinder started to think about his faith more when he and his wife had children.

“I had a mini-depression in my late 20s or early 30s,” he says, “I call it ‘manopause.’ I went back to confession. The relief! The burden of so many years of not confessing just peeled like an onion off my shoulders.”

In 1996, Bellinder was shot during a workplace break-in. He entered the diaconate in 2002. But lingering effects of the shooting, surgery, infection and another fight with depression took him away from the deaconate and reconciliation for several years.

“I felt that God had disappeared out of my life,” he says. “My wife, thank God for her, forced me to go to church. Instead of going to my home parish, we started going to the smaller chapel at the veteran’s hospital.”

Five years ago, a friend suggested a Cursillo retreat.

“It was one of the best ever,” Bellinder said. “I spent time before the Blessed Sacrament and examined my conscience. Making my confession was the biggest step in my recovery. I totally gave my life to Christ.”

“In the confessional, God meets man and man meets God in his mercy,” said Bellinder. “If it’s a truly sincere confession, we are brought out of the darkness of sin and into the light of Christ.”

Pratt is a columnist for Catholic News Service. Her website is www.maureenpratt.com.

PREVIOUS: Regular trips to the confessional wash away the build-up of sin

NEXT: The biblical basis for the sacrament of reconciliation