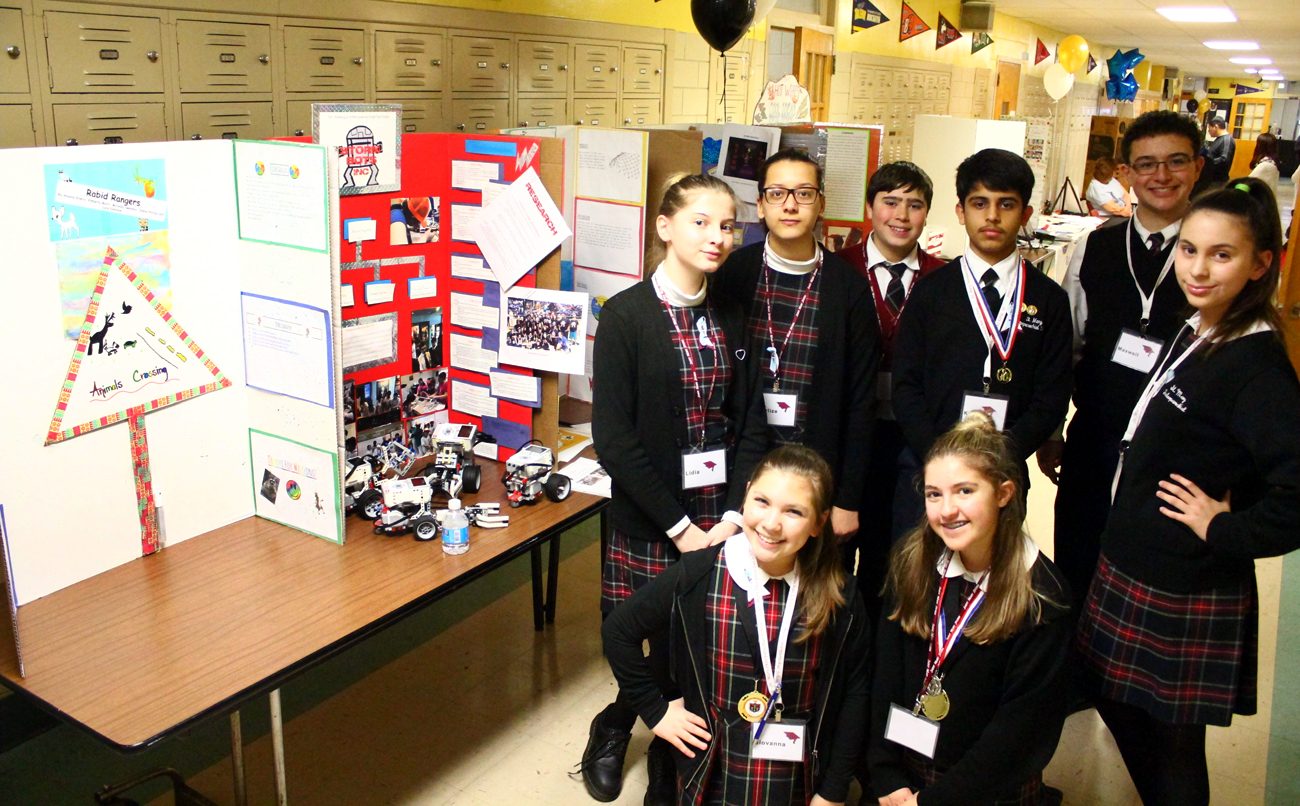 Students from St. Mary Interparochial School show off their robotics projects at an event in 2017. (Sarah Webb)

As St. Mary Interparochial School in Old City celebrates Catholic Schools Week, it can trace back to a unique history, starting by best estimate in 1782 at St. Mary Parish as the first Catholic elementary school in Philadelphia.

The school closed in the wake of a devastating fire in 1902, and had a rebirth in 1968 as an interparochial school, initially serving children from St. Mary and six surrounding parishes. Since then it has not only survived but has flourished.

St. Mary Parish, founded in 1763, was originally intended to replace nearby St. Joseph’s, Philadelphia’s first Catholic parish that was then quite small. In the end both churches remained open and in 1810 St. Mary’s became Philadelphia’s first cathedral, ultimately replaced by St. John the Evangelist and finally the Cathedral (later Basilica) of SS. Peter and Paul.

St. Mary School did not retain its status as Philadelphia’s only parish school for long because over time literally every parish in the city and many in the suburbs also opened an elementary school.

But by 1902 when St. Mary School burned, most of the oldest sections of Philadelphia had lost residential population as homes in Old City, Society Hill and Center City were torn down and replaced by industrial and commercial buildings. One by one, parish schools in the area were shuttered.

By 1968 the revitalization of Old Philadelphia that had begun under Mayors Joe Clark and Richardson Dilworth was well underway with a population return to mostly upscale residential homes and apartments.

The decision was made to reconstitute a St. Mary School in 1968 in a new building. It was done not as a single parish school but encompassing St. Mary and the nearby parishes of St. Joseph, Holy Trinity and St. Augustine. Further afield there were St. John the Evangelist to the west and further north on Broad Street, Assumption B.V.M. and Our Lady of the Blessed Sacrament; the latter two have since closed.

The school officially opened in September 1969, under the direction of the Sisters of Notre Dame de Namur. It really was unique in its day. Although it takes the name of St. Mary where it is located, it is an “interparochial school” with its own independent board, but still with some direction from the archdiocesan Office for Catholic Education.

It is the only school in the archdiocese with that designation, but it is certainly a forerunner and somewhat a model for the regional schools that have more recently emerged across the archdiocese.

An excellent report prepared in 1971 by the administration and Home and School Association and sent to the Notre Dame Provincial Council in Maryland is telling.

There were at that time 186 students. Family incomes ranged from $25,000 ($200,000 in today’s money) to real poverty. Most of the poverty was in the northern parishes that had not yet been redeveloped. The student body was 45 percent black, mostly from Blessed Sacrament, which was a designated Black Catholic parish; 23 percent were Puerto Rican and 32 percent were white.

Regardless of family finances or nationality, the report stated, “Each child and each family comes to St. Mary’s with dignity intact and an initial knowledge of belonging.”

Times change of course, and St. Mary Interparochial has changed too. At this time most students are not from the original designated parishes; they represent 42 parishes of the Archdiocese of Philadelphia, and the Dioceses of Camden and Trenton, as well as 20 percent who are not Catholic.

The Sisters of Notre Dame are no longer present but they have been succeeded by an equally dedicated lay faculty led by Jeanne Meredith for the past 12 years. Under her leadership St. Mary School was named a National Blue Ribbon School of Excellence by the U.S. Department of Education in 2016 in recognition of exemplary high performance.

It has also been given a score of 10, the highest possible rating given by GreatPhillySchools.org, which ranks public, parochial and private schools based on academic performance, school attendance and safety.

Safety is partially based on location, and a bonus to St. Mary’s location in Old City also lends itself to student exposure to all of the historical and cultural sites of Old City, Society Hill and beyond.

“We use our neighborhood for a classroom,’ said Christina Haciski, the director of development.

Within its walls in addition to the grade teachers there are additional teachers who focus on Spanish, art, music, technology and physical education.

At this point St. Mary counts 265 students in grades Kindergarten through eight. Technically the capacity is 225, but “we have been over that for the past 10 years and most do stay through eighth grade,” Meredith said.

Possibly because of the decline and eventual closing of Our Lady of Mercy in 1984, the African American population has dwindled but is still a respectable 15 percent, according to the school’s latest annual report.

It is also 10 percent Hispanic, 5 percent Asian, 66 percent Caucasian and 4 percent others. In spite of the school’s definitely high-income location, 54 percent of the children come from economically disadvantaged areas, according to the annual report.

One of the best judges of any school is what comes after, and in St. Mary’s case, last year’s 26 graduates received more than $665,000 in scholarships or tuition aid for high school.

Certainly, over the years, St. Mary Interparochial has changed with the times, most notably building on the heritage of a closed parish school to become what it is today at its resurrected site.

Poised to celebrate its 50th anniversary as an interparochial school, in the words of Jeanne Meredith, “What drove the founding pastors to sacrificially build this beautiful and modern school in 1968 – a quality Catholic education – is still the driving force at work today.”

NEXT: As special-needs students mainstream at parish school, it’s win-win for all