Ash Wednesday can mark a rebirth of faith in lapsed Catholics 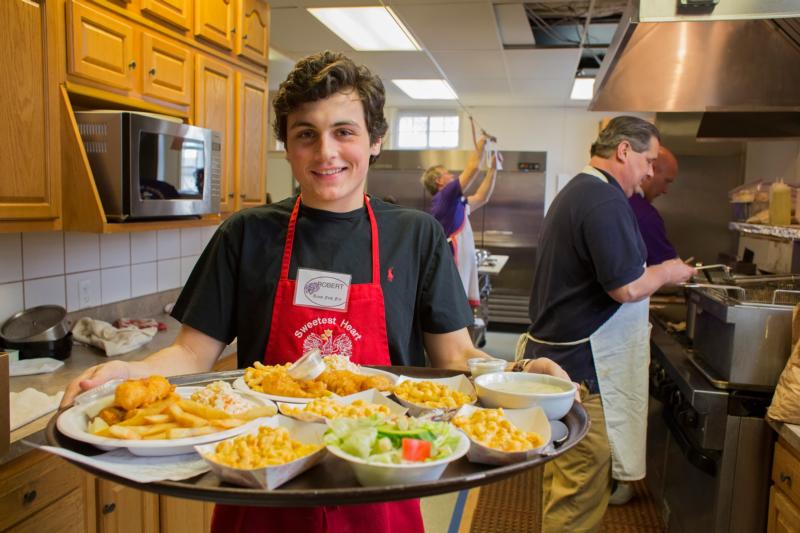 A young volunteer displays food prepared for dinners served at a Friday evening fish fry in 2014 at Sweetest Heart of Mary Catholic Church in Detroit. How can parishes hold on to “Ash Wednesday Catholics”? Give them seasonal opportunities to practice their Lenten call to prayer, fasting and almsgiving: Distribute devotional guides, host fellowship Lenten meals and suggest possibilities for volunteering in their neighborhood. (CNS photo/Jim West)

Unlike Christmas, Easter and every Sunday of the year, Ash Wednesday is not a holy day of obligation. Maybe that’s part of the draw for some people, who fill their parish churches for Ash Wednesday liturgies as they rarely do at any other time.

“Yes, we get big turnouts for Ash Wednesday,” says Father Dan Rupp, pastor of Mater Dei Church in Sioux City, Iowa. “It seems like many of these folks are people who also come for the blessing of the throats, or anytime there is something different going on than at most Sunday liturgies.”

Or, in some cases, when something is being given away, like palms on Palm Sunday, smiles Father Adam Lee Ortega, pastor of the Cathedral Basilica of St. Francis of Assisi in Santa Fe, New Mexico.

“Every year, after our Ash Wednesday Masses are done, people will rush up asking, ‘Are you still giving out ashes?’ And we say, ‘No, we’re done.’ What we need to help them understand is that it’s not about the ashes, it’s about the Eucharist.”

And, in fact, Father Ortega, like many pastors throughout the country, finds Ash Wednesday can be an ideal point of entry, or re-entry, into an active Catholic life.

“I think many people have a good intention to begin their spiritual journey, to improve their lives when they come to Mass on Ash Wednesday,” he says. “So I try to communicate a message of welcome: ‘We’re glad you’re here, and we want to help you become ready for this great spiritual journey.'”

Ash Wednesday provides a particularly strong opportunity to evangelize younger or inactive Catholics, according to a study by the Center for Applied Research in the Apostolate, and cited in “Sparks from Ashes: An Ash Wednesday Young Adult Evangelization Plan,” from the Diocese of Joliet, Illinois.

The reasons for these “inactive and semi-active” young adults’ Ash Wednesday and Lenten participation varies, from “a subconscious Catholic identity” and “sense of nostalgia” (reminding them of “earlier, less stressful times”) to peer pressure and “pop culture” (the connection to Mardi Gras).

Perhaps most poignantly, the report notes, “the winter months are times when depression, loneliness and lack of purpose sinks into people’s lives, especially among young adults. Getting reconnected to a spiritual or religious experience becomes a priority, and Ash Wednesday is the physical expression of that need for meaning, purpose, comfort or direction.”

So how can parishes hold on to these Ash Wednesday Catholics? To start with, say pastors, give them seasonal opportunities to practice their Lenten call to prayer, fasting and almsgiving: distribute devotional guides, host fellowship Lenten meals and suggest possibilities for volunteering in their neighborhood.

Most important, offer them something more than ashes.

“I try always to communicate the joy of the Gospel in my homilies, that there is comfort and peace within the teaching of Jesus,” says Father Rupp. “Many folks who don’t come often to Mass have the attitude that religion brings us misery, and that’s something we have to overcome.”

Father Ortega in Santa Fe — who moves the distribution of ashes to the end, rather than the middle, of Ash Wednesday Mass, so that attendees hear the homily and receive Communion — says Mass attendance definitely increases during Lent.

“And some continue to come after Easter, though not in the same numbers,” he says. “In the end, you have to accept people where they’re at, as Jesus did, and pray that a seed has been planted that can be nourished and bring them to a life of participation in the church.”

PREVIOUS: It’s OK to auction off a blessed car, even a Lamborghini

NEXT: Ashes on the outside call us to look inward during Lent