To enter the kingdom of God, we first enter the desert

Growing our hearts this Lent through a ‘spiritual game plan’

Becoming a missionary disciple through Lent

Lent turns us inside out to set us straight 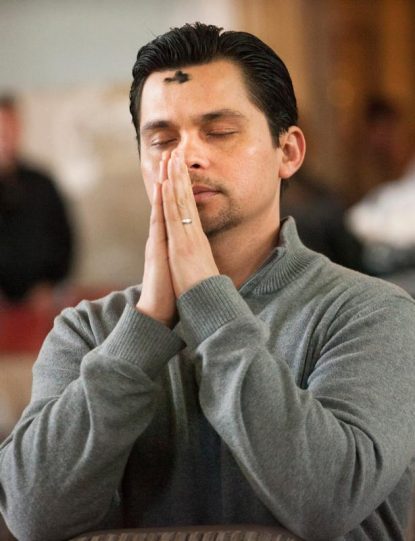 A man prays after Ash Wednesday Mass in 2014 at the Cathedral Basilica of St. Louis. Prayer, fasting and almsgiving for the care of poor and suffering people are three central Lenten practices. (CNS photo/Lisa Johnston, St. Louis Review)

“The one who has hope lives differently; the one who hopes has been granted the gift of a new life.”

Those words appear in Pope Benedict XVI’s 2007 encyclical on hope titled “Spe Salvi,” a title based on St. Paul’s statement in his Letter to the Romans that “in hope we were saved” (8:24). They sum up certain key goals of the Christian season of Lent.

In Lent Christians pursue ways of living differently — better and in more hopeful ways, that is. The actual possibility of “new life” is Lent’s promise.

Prayer, fasting and almsgiving for the care of poor and suffering people are three central Lenten practices. A great many Christians enter Lent with the firm intention of praying in a more committed way during these weeks and a conviction that prayer will open a path for them toward new life and hope.

Vietnamese Cardinal Nguyen Van Thuan testified forcefully in the late 20th century to the intimate relationship between prayer and hope. Pope Benedict’s encyclical speaks of this.

Remarkably, during Cardinal Van Thuan’s long, senseless and cruel imprisonment by Vietnam’s communist authorities beginning in 1975, the virtue of hope, rooted in prayer, was powerful for him. Pope Benedict wrote:

“(The cardinal), a prisoner for 13 years, nine of them spent in solitary confinement, has left us a precious little book, ‘Prayers of Hope.’

“During 13 years in jail, in a situation of seemingly utter hopelessness, the fact that he could listen and speak to God became for him an increasing power of hope, which enabled him after his release to become for people all over the world a witness to hope — to that great hope that does not wane even in nights of solitude” (No. 32).

However, the problem of prayer often is that we do not sense it is leading to anything as rewarding as the hope Cardinal Van Thuan experienced. Instead, we start Lent with the best intentions, viewing it as a unique time for prayer and spirituality, but find that this fervor can somewhat readily fade.

Perhaps we do not feel that we really know how to pray, how to “listen” to God and to “speak” with God, as Cardinal Van Thuan did. Instead of conversing openly with God about our most intimate concerns, we may lay out in the same rote way day by day our list of petitions to God for family members, sick friends and people who make their needs known to us.

Certainly, petitions are an integral element of Christian prayer. “I remember you constantly, always asking in my prayers that somehow by God’s will I may at last find my way clear to come to you,” Paul wrote to the Romans (1:9-10).

Still, at some point we are likely to wonder whether some new ingredient needs to be stirred into our prayer life. What can we do if we feel bogged down by our own ways of praying in private?

One possibility is to make time for meditation, to reflect in ongoing ways on important concerns of Christian faith that relate to the actual life we lead. Hope seems to be a more-than-worthy candidate for this kind of prayer and meditation. It is difficult to envision the possibility of the “new life” Pope Benedict mentions when hope has withered.

“A first essential setting for learning hope is prayer,” said Pope Benedict (No. 32). “When we pray properly,” he added, “we undergo a process of inner purification that opens us up to God and thus to our fellow human beings” (No. 33).

Lent is a season of change. It usually is called a season of conversion, which ultimately involves turning in a new direction.

Bishop Robert N. Lynch remarked in 2010 that Lent “at its core” is about “a deep and sincere change of heart.” The now-retired bishop of St. Petersburg, Florida, hoped that “any practice like fasting, which is embraced during this season,” would lead to change that lasts “a lifetime.”

Of course, the term “change of heart” refers to a change of some real consequence, possibly a change in attitude or priorities.

Do certain expectations or judgments — certain established ways of thinking about ourselves, others and our surrounding world — rule our lives, even though they contribute to draining happiness and hopefulness from us?

Have we considered whether our priorities — our set goals, how we allot our limited time — deserve new thought?

Are we in conflict with ourselves or others in noteworthy ways that deserve attention and might benefit enormously from more reconciling, supportive attitudes?

A process of conversion is meant to take place throughout life, Ireland’s Catholic bishops commented in 2012. They explained:

“We can gradually come to know ourselves and our destiny better. It is also true that as life goes on we acquire new blind spots, new denials of our responsibilities, new self-justifications.”

Thus, said the bishops, “the process (of conversion) is never completed, and it involves setbacks as well as growth until we meet the Lord at the end of our lives.”

PREVIOUS: Ashes on the outside call us to look inward during Lent