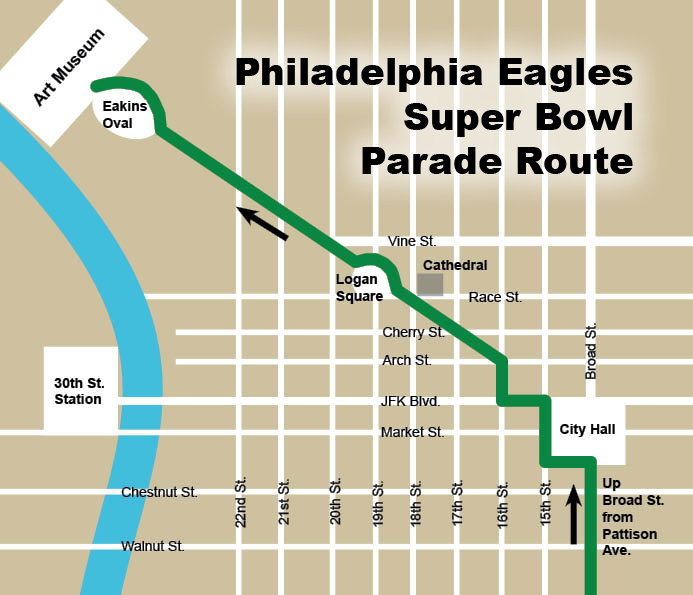 An Eagles’ Super Bowl championship parade whose size may be dwarfed only by the tsunami of emotions flowing from it will take place in Philadelphia on Thursday, Feb. 8.

Because of expected city road closures and heavy demands on public transportation throughout the Philadelphia region, the Archdiocese of Philadelphia announced all archdiocesan high schools and parochial schools will be closed that day. The city’s public schools and some suburban districts also are cancelling classes on Thursday.

The route for the parade, expected to begin around 11 a.m., will begin with team members in open-air vehicles traveling up Broad Street from Pattison Avenue in South Philadelphia and proceeding north to the Benjamin Franklin Parkway and ending at the Philadelphia Museum of Art.

A sound system and 14 jumbo television screens will line the route on the parkway and broadcast the rally at the art museum, expected to end around 3 p.m.

Dozens of food trucks and hundreds of port-a-potties will be available along the route lined with barricades to control the hundreds of thousands expected for the parade.

To accommodate their travel needs, rides on the Broad Street Subway and Market-Frankford El will be free all day Thursday, thanks to Independence Blue Cross. SEPTA’s regional rail lines will run inbound only on Thursday morning, then outbound only in the afternoon. Only select stations in the system will carry passengers — see more information on parade-day service on SEPTA regional rails here.

All parade visitors are urged to use mass transit, according to city officials, as roads along and near the route will close at 10 a.m., reopening around 6.

The city’s Office of Emergency Management is offering updates via text message to people who sign up by texting ReadyEagles to 888777.

The archdiocese, in a statement, congratulated the Eagles on their first-ever Super Bowl win and thanked the team “for bringing the Lombardi Trophy home to the City of Brotherly Love.”

Already known nationwide as among the most passionate, and long-suffering, fans in sports, the Eagles’ faithful will celebrate the team’s first Super Bowl championship victory.

With their 41-33 defeat of the New England Patriots in Super Bowl LII Feb. 4, the Eagles captured their first NFL championship since 1960 and their fourth in the franchise’s 85-year history.

NEXT: Dominican priests to take over ministry at St. Patrick Parish