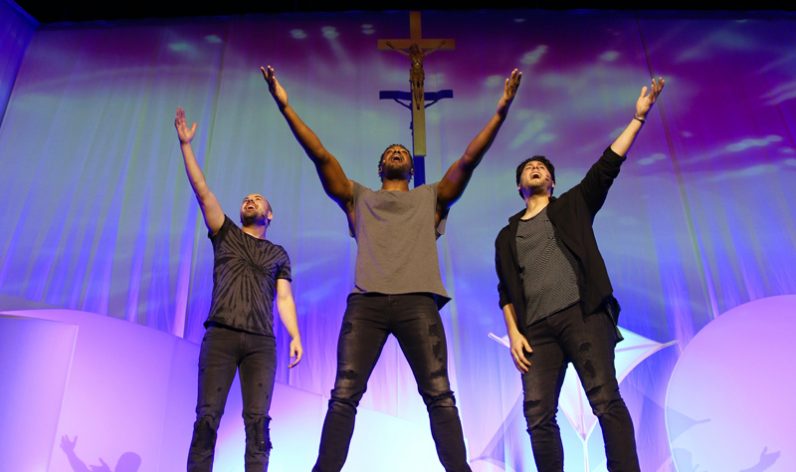 Cast members perform a scene from “The Cross and the Light,” a musical drama on the passion, death and resurrection of Jesus coming to St. John Bosco Church, Hatboro, March 8-10. More than a show, “it is an encounter with Christ,” said the producer, herself a Catholic convert.

During the season of Lent it is appropriate through various devotions to focus on the passion and death of our Lord and Savior, Jesus Christ. But it is also important to remember that these two horrific events were a necessary prelude to the resurrection of Jesus and the continuing Pentecostal gift of the Holy Spirit.

These four interlocking events will be dramatically memorialized during the presentation of a critically acclaimed production, “The Cross and the Light,” at St. John Bosco Church, Hatboro, from Thursday, March 8 through Saturday, March 10.

It will be the first time ever it has been presented in the Philadelphia area.

“This particular play is so effective certainly because of its Hollywood-level quality of special effects, singing and acting,” said Meghan Cokeley, director of the Office for the New Evangelization for the Archdiocese of Philadelphia. “But above all because Jesus Christ is the center and heart of this event. This show promises to be a strong catalyst for conversion.”

“The Cross and the Light” originated in the Archdiocese of Detroit, where with the approval of Archbishop Allen Vigneron it has been presented at the Cathedral of the Most Blessed Sacrament and various churches throughout the diocese and now continues around the country.

“This is not just a show, it is an encounter with Christ,” said Kelly Nieto, who is the creator and producer of “The Cross and Light.” 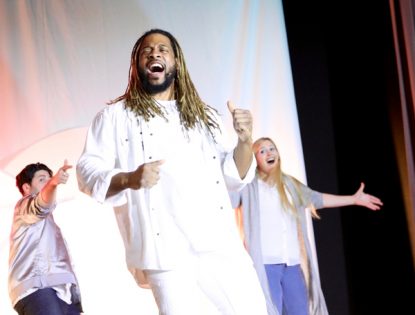 While the production will only be at St. John’s for three days, planning for it started a year ago. John and Janet Sikina, who chair the committee at St. John’s, flew to Florida to see a production in that state.

“It really builds your relationship with Jesus Christ,” Janet said. “The cast is young and it is told in 21st century terms. The music tells the story and the story changes lives. We left crying.”

The cast utilizes the talents of seven highly qualified singers, most playing multiple roles, including Jesus, Mary, Peter, Mary Magdalene, Judas, Caiphas, Thomas, Mary Cleophus, Pontius Pilate, a soldier and a priest. They are backed by a support staff of six utilizing huge Broadway-quality wall projections and equipment, which Nieto said is worth $500,000.

They are the work of Technical Director Ryan Richert, whose Outside the Box Ministries works exclusively with faith-based events.

“The Cross and the Light” is more than a production, it is an instrument for evangelization and re-evangelization. Nieto herself, whose previous experience was in the theatrical field, has an interesting conversion path.

“I was an agnostic who would have nothing to do with God,” she said.
“I was a birth atheist. My mother was an atheist and I had a non-practicing Lutheran father.

“I literally did not believe in Jesus and I hated Catholics in particular. I was 35 years old when I was told my mother was going to die. I found myself crying on a University of Michigan bathroom floor and I cried out to God. I bargained, if you keep my mother alive and show me the truth I will give you the rest of my life.”

Her mother lived and is still alive, but “Boy, did God ever take advantage of that promise,” she said. 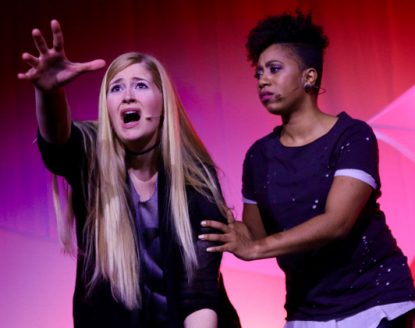 St. John Bosco seats about 1,100 and it is anticipated about 6,000 people will attend over the course of the three days.

It is really suitable for almost anyone over the age of 6 and it is not limited to parishioners. Everyone is invited. It could be a family event, an RCIA event, a program for youth ministry, school groups, adult groups and just about anyone.

‘We are so blessed to have people like Father Gary Kramer and John and Janet Sikina working with us at St. John Bosco,” Nieto said of the parish’s pastor and parishioners. “This literally changes the lives of persons who have seen it.”

“The Cross and the Light” will be presented at St. John Bosco Church, 215 East County Line Road in Hatboro,atboro  at the following dates and times:

Tickets may be purchased through crossandlight.org/stjohnbosco.

PREVIOUS: Worship at ‘Anthem Live’ then have fun in Manayunk