Jesus’ most important journey to Jerusalem 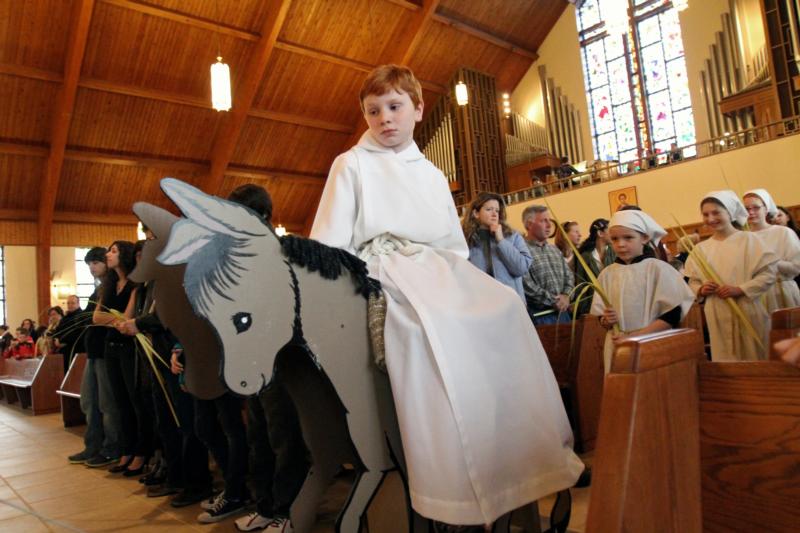 A boy portraying Jesus rides a wooden donkey in the procession during Palm Sunday Mass at Sts. Philip and James Church in St. James, N.Y. Although Jesus would have traveled to Jerusalem many times throughout his life, Mark’s Gospel details only one journey to highlight Jesus’ triumphant entry into the city as messiah-king, and to emphasize the events that lead up to and culminate in his death and resurrection. (CNS photo/Gregory A. Shemitz)

In many ways, the Gospel of Mark is quite mysterious. Even a superficial reading often leads to many questions. A deeper reading may give some answers, but reveals many more puzzles.

During Holy Week, as we reflect on the passion narratives presented in the Gospels, we may notice that, although Jesus surely went to Jerusalem many times throughout his life to observe the Jewish feasts, Mark recounts only one visit (Mk 11:1-10). Why would that be?

The short answer is that, for Mark, everything in Jesus’ life led up to and culminated in the crucifixion and resurrection. Everything in Mark’s Gospel is a precursor to the entry into Jerusalem at the beginning of the week of the Passion. Mark’s Gospel is oriented toward the death and resurrection of Jesus, and this climax begins with the triumphal entry into the Holy City.

One feature of Mark’s Gospel that hints at this orientation is what has become known in later centuries as the “messianic secret”: Throughout the Gospel, Jesus endeavors to keep his identity as the Son of God hidden. Whenever he heals someone of an affliction, he asks them not to tell anyone; when demons call out to him as Son of the Holy One, he silences them, as it is not the proper time for him to be revealed.

The secret is finally revealed during the week of the Passion, symbolically right from his entrance into the city. This triumphal, heraldic entry follows visits to Bethany and Bethpage, located on the Mount of Olives. The prophet Zechariah prophesied that this would be the site where God’s kingship would be revealed in the last days (Zec 14:4-9).

By waiting until the end of Jesus’ ministry to discuss his time in Jerusalem and its surrounding environs, Mark is able to emphasize the importance of every action of Jesus.

Jesus’ entry into Jerusalem is triumphant, victorious — the victory parade before the battle, in a manner of speaking. There is an expectation that the king will return to Jerusalem; the messiah-king will return in triumph, and save God’s people from their torment.

Jesus fulfills this messianic-kingly expectation of the return to Jerusalem. When he rides on the colt set aside for this purpose, and the people chant “Hosanna!” as he processes in, he is heralded as the messiah-king. These features of his entrance into the city follow precedents seen throughout the Old Testament, especially those found in 1 Kings 1:32-34; 2 Kings 9:13; 1 Maccabees 13:51; and Psalm 118:26.

Mark focuses on this single journey to Jerusalem to give it emphasis and weight. If he were to depict many entrances into the Holy City, he would not be able to stress as clearly the heraldic, messianic import of this final excursion into Jerusalem. Jesus entered the city as the culmination of his ministry, and the fruition of his earthly work.

Within the week, Jesus would be arrested, tried and crucified. Then, after three days, he would rise from the dead. The victory was won, sin and death were defeated. Hosanna in the highest!

PREVIOUS: Through the Scriptures of Palm Sunday, we enter into the Lord’s passion

NEXT: Exhausting and intense, Holy Week leads us from sorrow to joy