Palm Sunday proclaims an eternal message for a modern moment 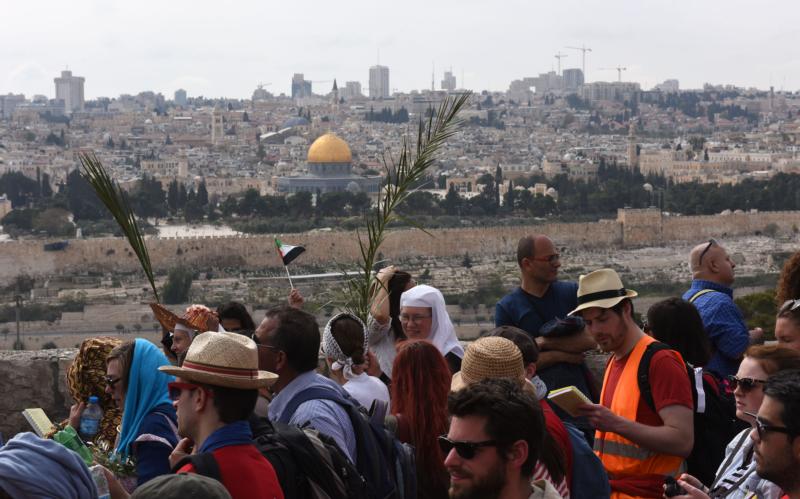 Christians carry palm branches in 2017 while walking the traditional path that Jesus took on his last entry into Jerusalem during the Palm Sunday procession on the Mount of Olives in Jerusalem. The Palm Sunday cry of Christians, “Blessed is he who comes in the name of the Lord,” was heard many centuries ago in Jerusalem’s streets. It still is heard today. (CNS photo/Debbie Hill)

The Palm Sunday cry of Christians, “Blessed is he who comes in the name of the Lord,” was heard many centuries ago in Jerusalem’s streets. It still is heard today.

The words of this cry are so familiar that their meaning risks being overlooked or taken for granted. They hold a great challenge, however.

Let’s visit the writing of Etheria, a woman from Galicia, a Spanish province, who traveled to the Holy Land in the fourth century. Her word images of Christian life in Jerusalem became an invaluable tool for future historians.

The Palm Sunday procession she described must have been quite a sight. It began at the Mount of Olives, with the people bearing palm and olive branches. Parents carried children on their shoulders, as the somewhat slow-moving procession made its way from the mount’s top and through the city.

It advanced slowly, Etheria explained, in order not to weary people. Her account revealed that much of the day had been and still would be devoted to prayer, singing and worship. These events surely fatigued many.

Notably, after the Gospel account was read aloud of Jesus entering Jerusalem on a donkey, surrounded by children carrying branches and palms, the procession commenced.

Etheria indicates that people of all ages and ranks walked together, praying, singing and responding to each other, “Blessed is he who comes in the name of the Lord.”

This happened around the year 385, setting in motion the events of the week ahead, known to Etheria as the Great Week, known to us as Holy Week.

There can be a sense as Holy Week begins that light now will be cast on whatever is good and whatever detracts from the good. The week ahead, after all, recounts the passion of Jesus. Yet, it culminates on as high a note as possible, the Lord’s Resurrection.

The days of the Easter triduum, beginning Holy Thursday and ending on Easter, are like one day in which currents of death and new life converge wondrously.

With all of that in mind, contrast Jerusalem’s Palm Sunday in 385 with the Palm Sunday of 1980 in El Salvador’s capital, San Salvador.

Blessed Oscar Romero, San Salvador’s Catholic archbishop, had been assassinated just six days earlier while celebrating Mass. Known and greatly respected for his social justice advocacy and closeness to his people, but strongly opposed by some, he had sensed that he might meet a violent death in his conflicted nation.

Palm Sunday was the day of his funeral. His casket was placed on the front steps of his cathedral. But shooting erupted in the square, and many were killed. Thousands sought protection by crowding into the cathedral.

The archbishop’s casket was brought inside and quickly placed in the tomb prepared for him.

Archbishop John Quinn, at that time San Francisco’s archbishop, attended the funeral. He asked demandingly, “Who was responsible for this sacrilege, for this insult to humanity, for this unbelievable outrage on Palm Sunday?”

Six years later Archbishop Quinn returned to San Salvador to deliver a speech to a World Day of Peace observance. The events of Palm Sunday 1980 represented a call to become peacemakers, he suggested.

“In its suffering, death and persecution, the church is called to share in the mystery of the suffering and death of Christ,” said Archbishop Quinn. He stressed that “the Gospel of Christ calls not to violence but to reconciliation.”

He insisted: “Sin and death are not the victors. The victor is Jesus Christ.”

Doesn’t the Palm Sunday cry of Christians, then, challenge every Christian and Christian community to come “in the name of the Lord”?

We know much about Jesus. He cared for the sick. He befriended the poor, instilled hope and communicated life and love. Does coming in the name of the Lord imply all of that and more?

Bishop Daniel E. Flores of Brownsville, Texas, said recently that the kingdom of the crucified and risen Christ “is not about cultivating relations with people who can profit you, it’s about being good to people who cannot pay you back.”

That suggests that those who come in the name of the Lord will find themselves running at times against society’s tide.

Love, Pope Francis remarks in his 2018 Lenten message, “is the core of the Gospel,” but love can “grow cold.” A “chill that paralyzes hearts and actions” can sweep over us, he cautions. It can weaken the “sense of being members of one human family” and even result in violence when others do “not live up to our expectations.”

As Easter approaches he encourages all to ask “how it happens that charity can turn cold within us. What are the signs that indicate our love is beginning to cool?”

PREVIOUS: Exhausting and intense, Holy Week leads us from sorrow to joy

NEXT: Reflections on Palm Sunday, the start of our Holy Week journey