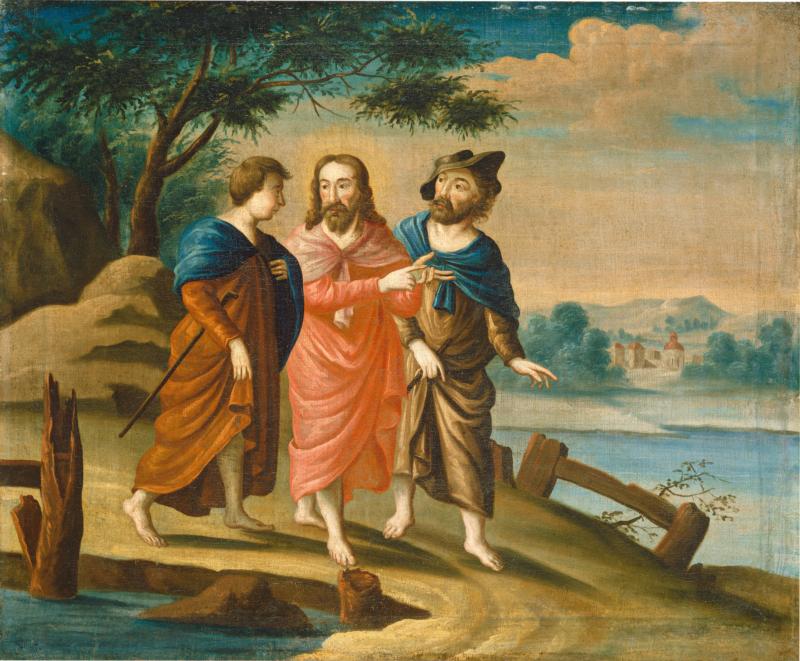 This is an American 18th-century painting entitled “Christ on the Road to Emmaus.” On the first Easter Sunday two of Jesus’s disciples, disillusioned by the events of the past three days, set out from Jerusalem for Emmaus, several miles away. En route they meet a stranger who appears totally unaware of what has transpired in Jerusalem. (CNS photo/courtesy National Gallery of Art)

On the first Easter Sunday, two of Jesus’ disciples, disillusioned by the events of the past three days, set out from Jerusalem for Emmaus, several miles away. En route, they meet a stranger who appears totally unaware of what has transpired in Jerusalem.

Jesus, they tell the “stranger,” was “a prophet mighty in deed and word,” an earthly hero who, they hoped, would “redeem Israel,” and they seem skeptical about the report of the empty tomb and the women’s “vision of angels.”

They invite the stranger to stay with them, because evening draws near. As they sit down to a meal, he takes, blesses and breaks the bread. “Their eyes (are) opened,” and they recognize Jesus.

Despite the distance they have already traveled, they return immediately to Jerusalem to tell the others their amazing news.

When their eyes are opened, it isn’t merely a matter of recognition but of enlightenment.

When they recognize Jesus in the breaking of the bread, they see more than a mighty prophet: They see the risen Lord.

Once again, Jesus has proven himself “mighty in deed and word.” The two disciples recognize him in the breaking of the bread — the deed — but they were prepared by his words as he “interpreted to them what referred to him in all the Scriptures.”

Their journey has been both a physical journey from Jerusalem to Emmaus and a journey of spiritual enlightenment as they encounter the risen Lord. But this encounter isn’t simply a happy reunion; it prepares them to be Jesus’s witnesses to the ends of the earth. They had a journey to make — now they have a story to tell.

The next stage of their journey takes them to the place of Jesus’ ascension into heaven, and then to the upper room in Jerusalem, where the Holy Spirit will empower them to fulfill the Lord’s command to be his witnesses to the ends of the earth.

This command extends to us as well. And we, too, need to have our eyes opened. Jesus’ explanation of the prophecies presupposed the disciples’ familiarity with the Scriptures. How do we get started?

Catholics are blessed to belong to a liturgical church, in which the daily and weekly readings are predetermined according to the feasts and seasons, so that over the course of a year the entire paschal mystery, explained and recounted by the New Testament and set into a wider context by the Old Testament, unfolds before us.

There is, as I’ve heard said, a “certain humility” in letting ourselves be thus guided in our reading of the Scriptures — rather than picking a passage from the Bible at random and reading it independently of any context.

A variety of resources, in print and online, is available to help us read the day’s readings before the Mass, many of which have commentaries to further our understanding.

At the liturgy, we are fed by the word as well as at the eucharistic table. Reading and reflecting on the word ensures that we get the most out of the banquet God sets before us.

De Flon is editor-at-large at Paulist Press and the author of “The Joy of Praying the Psalms.”

NEXT: Easter reminds us of our call to share the Gospel message