The evolution of Easter observances 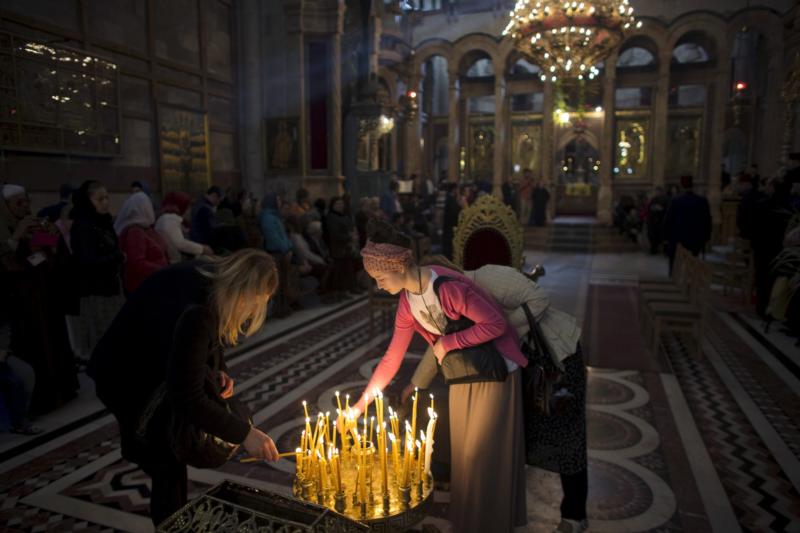 Women light candles in the Church of the Holy Sepulcher in Jerusalem’s Old City on Easter Sunday in 2015. Easter turned out to be quite controversial for the early Christians. Their initial problem was when to celebrate the feast. (CNS photo/Ronen Zvulun, Reuters)

Given the importance of the feast and the prominence of Paul, who could object to this?

Actually, Easter turned out to be quite controversial for the early Christians. Their initial problem was when to celebrate the feast.

All four Gospels describe the Resurrection, and all Christians accepted that it occurred on a Sunday. But the exact historical date (like that of the Nativity) was unknowable. As a result, Christian leaders decided to select an appropriate date.

This solution proved to be far from simple. Many Christians were ethnic Jews, and their main church (or “see”) was Jerusalem. They thought that all Christians should use the Jewish reckoning, since the Hebrew calendar was sacred. Some gentiles were willing to accept that, and for them Easter would then fall on the Sunday following the 14th of the Jewish lunar month of Nisan.

Some Christians tried that calendar, only to discover that the reckoning of the month Nisan was different in the major gentile bishoprics of Alexandria in Egypt and Antioch in Syria — major theological centers that both wanted to debate the matter for decades.

But these two were Greek-speaking bishoprics. The Latin Christians had their own view, and they generally followed the lead of the See of Rome.

Not until 455 did the matter become settled when the bishop of Rome, Leo I (also known as Leo the Great), decided to accept the Alexandrian method.

Still following Jewish biblical tradition, the Christians concluded that such a major feast deserved a period of sacred preparation that included fasting.

Why? Because catechumens, those pagans who wished to become Christians, had to undergo a pre-baptismal fast for a period of 40 days, modeled after Jesus’ 40-day fast before his public ministry, as well as those of the Old Testament prophets Moses and Elijah. This practice became widespread in the fourth century.

This fast was the real thing — people observing it could eat only one meal per day, toward the evening. The choice of meals was very limited: no fish and no meat. Even eggs were prohibited, since they came from animals.

Yet the surviving evidence indicates that believers willingly accepted these demands.

Attendance at church was also expected, at least in urban areas, and some of the famous episcopal orators, such as Sts. John Chrysostom and Augustine of Hippo, preached brilliant Easter sermons.

Inevitably things would change. By the Middle Ages, people were allowed to break the fast at 3:00 in the afternoon. This late break helped agricultural workers to get through the day and had the added effect of increasing attendance at evening services.

Lent retained its penitential character well up to the Second Vatican Council (1962-1965), when the emphasis shifted to positive achievements pointing to the joy of Easter — for example, stressing the importance of charity and not just fasting.

Although it has been heavily commercialized by the candy, greeting card and clothing industries, Easter remains a sacred day and a sacred season.

PREVIOUS: Easter reminds us of our call to share the Gospel message

NEXT: Easter invites us to rejoice, to reflect and to renew the world