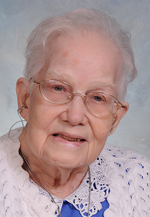 Sister Angela Erhard, O.S.F., 92, died Feb. 9 in Assisi House, Aston. She had been a professed member of the Sisters of St. Francis of Philadelphia for 74 years.

The former Mary Alena Erhard was born in Camden, N.J. She later moved to Philadelphia where she was a member of St. Ludwig Parish. Prior to her entrance into the congregation in 1942, she attended John W. Hallahan High School and completed her high school education after she entered. She professed her first vows in 1944.

Sister Angela ministered in elementary education, both as a teacher and as a secretary. After her retirement, she ministered with the elderly.

Sister Angela ministered for 42 years in the Archdiocese of Baltimore. She taught at St. Elizabeth School; St. Paul School; St. Anthony School; and SS. Philip and James School, all in Baltimore; and at St. Joseph School in Fullerton. She also worked as a secretary at the Catholic High School of Baltimore.

During her years in residence at St. Joseph Medical Center Convent in Towson, Md., she served in companion ministry and as a caregiver for a family member. Additional ministry included volunteering at Magnolia Manor Assisted Housing in Catonsville, Md.

Sister Angela ministered for 11 years in the Archdiocese of Washington, where she served in local house ministry at St. Bernadette Convent in Silver Spring and taught at Nativity School in Washington.

Sister Angela’s 19 years of service in the Archdiocese of Philadelphia included ministering with the retired sisters at St. Mary Convent in Bryn Mawr and later at Assisi House in Aston. In 2004 she became a resident of Assisi House and served in prayer ministry until her death.

The funeral Mass was celebrated Feb. 15 in Assisi House. Burial followed in Our Lady of Angels Cemetery in Aston.

Sister Angela is survived by­­­­ nieces, nephews, and by her Franciscan family.

Donations in her name can be made to Franciscan Ministries Foundation, 609 S. Convent Road, Aston, PA 19014.