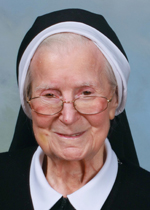 She was born in Shenandoah, Pa. Her family moved to Philadelphia where she attended Nazareth Academy Grade School and Nazareth Academy High School. She entered the congregation in 1946 and professed her final vows in 1954.

Her first assignment was as a teacher at Our Lady of Sorrows School in Scranton, Pa. She had assumed that education would be her lifework, but after only four years, she was sent to The Catholic University in Washington, D.C., and enrolled in the school of nursing.

When St. John Neumann Home was opened in 1965 as a skilled-care nursing home, Sister Beata was one of four Sisters of the Holy Family of Nazareth who were assigned to its administration. She began her new ministry as a member of the nursing staff, and in 1971 she was appointed administrator.

She retired from this position in 1993, but her ministry to the sick and elderly citizens of Philadelphia continued. She became a member of the Pastoral Care Team at St. John Neumann and remained in this position until 2013, when she retired to Mount Nazareth.

The funeral Mass for Sister Beata was celebrated Jan. 15 at Mount Nazareth Chapel in Philadelphia.