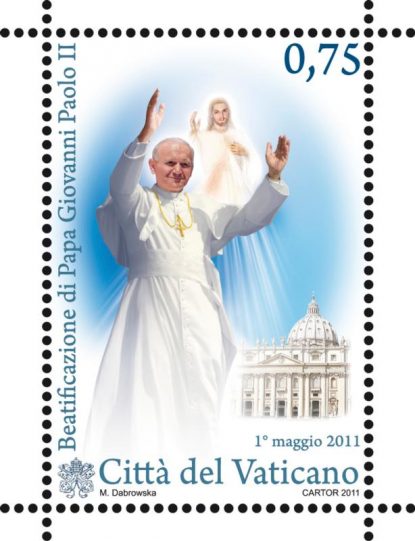 A stamp showing St. John Paul II, Jesus of Divine Mercy and St. Peter’s Basilica was jointly issued by the Vatican and Poland in 2011 to celebrate the beatification of the Polish pope that year, three years before his eventual canonization. There are many notable things about the life and papacy of St. John Paul, but the most notable is his devotion to divine mercy. (CNS photo/courtesy of Vatican Philatelic and Numismatic Office)

There are many notable things about the life and papacy of St. John Paul II, but perhaps most impressive was his devotion to divine mercy. In 1980, he wrote an entire encyclical on it, “Dives in Misericordia” (“Rich in Mercy”), in which he outlines the truth and meaning of mercy from biblical times to the present and beyond.

In it, he states mankind’s mission of mercy. “The church must profess and proclaim God’s mercy in all its truth, as it has been handed down to us by revelation,” he wrote. He took this task upon himself becoming for many the champion of divine mercy.

Not surprisingly, he seemed to have found in St. Faustina Kowalska a kindred spirit. She was a humble, uneducated and holy nun of the Sisters of Our Lady of Mercy in Poland who received extraordinary revelations of Our Lord. Jesus instructed Faustina to record his messages of God’s divine mercy. She did and compiled them into a diary.

Faustina’s message reverberated in John Paul II’s heart, as he demonstrated in his homily at her canonization on April 30, 2000.

“And you, Faustina, a gift of God to our time, a gift from the land of Poland to the whole church, obtain for us an awareness of the depth of divine mercy; help us to have a living experience of it and to bear witness to it among our brothers and sisters.

“May your message of light and hope spread throughout the world, spurring sinners to conversion, calming rivalries and hatred and opening individuals and nations to the practice of brotherhood.

“Today, fixing our gaze with you on the face of the risen Christ, let us make our own your prayer of trusting abandonment and say with firm hope: Christ Jesus, I trust in you! ‘Jezu, ufam tobie!'” he said.

At the same time, John Paul II declared Divine Mercy Sunday to be celebrated worldwide on the Sunday after Easter.

This was in accordance with Jesus’ own wishes as told to Faustina. Together, these two papal acts are the highest endorsement the church can give to a private revelation.

In his 2001 homily on Divine Mercy Sunday, John Paul II pointed to the revelations of Faustina as “the appropriate and incisive answer that God wanted to offer to the questions and expectations of human beings in our time, marked by terrible tragedies. … Divine Mercy! This is the Easter gift that the church receives from the risen Christ and offers to humanity at the dawn of the third millennium.”

His confidence in divine mercy never waived. Throughout his life, he not only promoted it, but he personified it. As if to crown his work, providence saw to it that John Paul II died on the eve of Divine Mercy Sunday 2005. He was canonized on April 27, 2014.

NEXT: St. Faustina Kowalska, the apostle of divine mercy