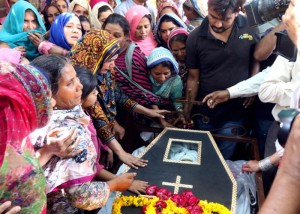 People react over the coffin of a victim March 28 a day after a suicide bomb attack at a park in Lahore, Pakistan. Pope Francis appealed to the government of Pakistan to take steps to ensure the safety of the country’s Christians and other minorities. (CNS photo/Rahat Dar, EPA)

Following several deadly attacks on Christians in Pakistan, St. William Parish will host a prayer vigil on Saturday, April 21 from 6 p.m. to 7 p.m. in its lower church, located at 6200 Rising Sun Avenue in Philadelphia.

As the home of area Pakistani Catholics, St. William feels a special connection with believers in Pakistan, who have long suffered for their faith in the risen Lord. Several recent attacks have been condemned by the bishops of Pakistan:

The parish’s 5 p.m. Vigil Mass, which will precede the prayer vigil, will also be offered for Christians in Pakistan.