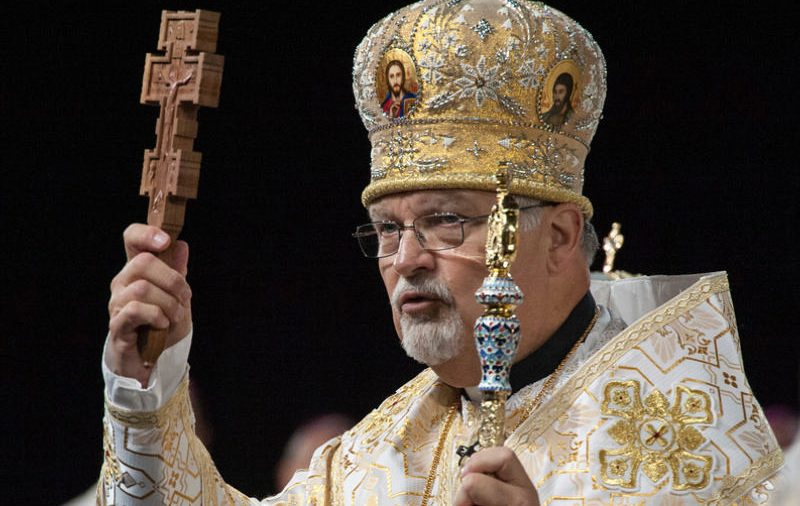 Pope Francis has accepted the resignation of Archbishop Stefan Soroka of the Ukrainian Catholic Archeparchy of Philadelphia and has appointed Auxiliary Bishop Andriy Rabiy of the same archeparchy to be apostolic administrator. Archbishop Soroka is pictured in a 2015 photo. (CNS photo/Knights of Columbus)

UPDATED – WASHINGTON (CNS) — Pope Francis has accepted the resignation of Archbishop Stefan Soroka of the Ukrainian Catholic Archeparchy of Philadelphia and has appointed Auxiliary Bishop Andriy Rabiy of the same archeparchy to be apostolic administrator.

Archbishop Soroka, 66, is resigning for medical reasons. Under church law, a bishop is expected to submit his resignation to the pope at age 75. His resignation was accepted in accord with Canon 210 of the Code of Canons of the Eastern Churches which allows a bishop to resign before age 75 “due to ill health or to another serious reason.”

The resignation and appointment were announced in Washington April 16 by Archbishop Christophe Pierre, apostolic nuncio to the United States.

Ukrainian-born Bishop Rabiy was named an auxiliary bishop for the archeparchy last August and his episcopal ordination took place in his native Lviv last September. He will remain apostolic administrator until a successor to Archbishop Soroka is appointed.

The Ukrainian Catholic Archeparchy of Philadelphia includes the District of Columbia, Virginia, Maryland, Delaware, New Jersey and parts of eastern Pennsylvania. It has a total Catholic population of 12,846.

“I take this opportunity to extend my heartfelt gratitude to the clergy, religious, seminarians and laity of the Ukrainian Catholic Archeparchy of Philadelphia,” Archbishop Soroka said in a statement. “These past 17 years have been filled with many challenges and blessings, some unique in the experience of the Philadelphia archeparchy.

“Success in responding to the varying needs of the archeparchy and its parishes was achieved with the positive and hopeful participation of clergy, religious and laity enabled by the grace of God,” he continued. “Most gratifying to me was the personal journey of prayer and fraternity experienced with the clergy, religious and faithful of the archeparchy.”

Archbishop Soroka said the highlight of his ministry as the head of the archeparchy leadership was being with parishioners “and their ministers in parish liturgical celebrations, visits, pilgrimages, festivals and in personal sharing.” He added “the dedication of the clergy, religious and faithful and their love for their church” was an inspiration to him.

He said he was grateful for “the fraternity and cooperation shared with my brother bishops” of the United States. “(The) common needs of clergy, religious and faithful were addressed in our regular meetings and in gatherings of our church,” he said. “The grace of God provided richly in our many shared endeavors.”

His priestly formation took place at St. Josaphat Ukrainian Catholic Seminary in Washington. At The Catholic University of America, also in Washington, he earned a bachelor of sacred theology in 1978 and a doctorate in social work in 1985.

He was ordained a priest June 13, 1982, for the Ukrainian Catholic Archdiocese of Winnipeg at Sts. Vladimir and Olga Cathedral.

After his ordination, he had a number of parish assignments, while serving as a chaplain for a couple of Knights of Columbus councils and also as chaplain for the national executive board of the Ukrainian Catholic Youth of Canada. He also was vocations director for the Winnipeg archeparchy, from 1985 to 2000. During that time, he also was vice chancellor, 1985-1994, followed by two years as chancellor.

At the national level, he has served the U.S. Conference of Catholic Bishops as a member of several committees: Committee for Aid to Home Missions, 2010-present; Ad Hoc Committee on Aid to the Church in Central and Eastern Europe, 2001-present; and Committee on Relations Between Eastern and Latin Catholic Churches, November 2003-2010. From 2002 to 2009, he also was a member of what is now the Committee on the Protection of Children and Young People.

In his statement, Archbishop Soroka thanked Pope Francis, Cardinal Leonardo Sandri, prefect of the Vatican Congregation for the Oriental Churches, and Major Archbishop Sviatoslav Shevchuk of Kiev-Halych, Ukraine, “for their understanding and compassion.” He also thanked the pope “for the confidence he has shown in the abilities” of Auxiliary Bishop Andriy Rabiy in naming him apostolic administrator.

“The risen Christ greeted his apostles with the words, ‘Peace be with you!’ May the peace offered by the risen Christ characterize our continued love and service of our Ukrainian Catholic Church,” Archbishop Soroka said. “Let us remember one another in prayer as we seek the intercession of the mother of God in this time of transition.”