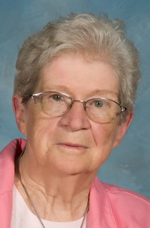 Daughter of the late Patrick and Catherine (nee Bradley) Gerrity, she was born in Centralia, Pa. and attended St. Ignatius Grade School in Centralia and Conyngham Township High School. She entered the Sisters of St. Joseph in September 1946 and professed her final vows in August 1954.

Sister Theresa ministered in the Archdioceses of Philadelphia and Newark.

She is survived by dear cousin Sister Barbara Bradley, S.S.J., nieces, grandnieces and members of her congregation, the Sisters of St. Joseph.

The funeral Mass for Sister Theresa was celebrated April 12 at St. Joseph Villa.

NEXT: Msgr. Stein, longtime editor, pastor in Pennsylvania, dies at 60