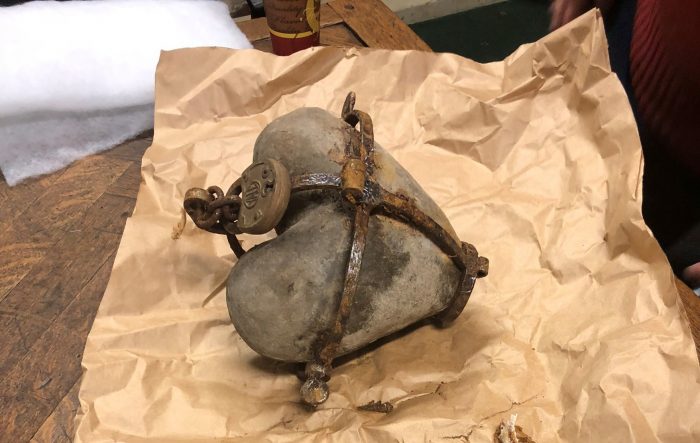 The preserved heart of St. Laurence O’Toole, patron saint of Dublin, was recovered this month after being stolen in 2012. (Image courtesy of the Catholic Herald/London).)

DUBLIN (CNS) — The preserved heart of Dublin’s patron saint has been recovered by police, nearly six years after it was stolen from a church in the city.

The St. Laurence O’Toole relic — which has been venerated for 800 years — was stolen from Christ Church Cathedral in October 2012.

A long-running investigation by detectives in the national police force led to the recovery of the heart in a park on the outskirts of Dublin. A police spokesman said the investigation was ongoing and revealed that the relic was recovered following what he described as an “intelligence-led operation.”

The heart was found undamaged and was set to be returned to the Anglican archbishop of Dublin in a ceremony April 26. While St. Laurence was elected archbishop of Dublin in 1162 during the pontificate of Alexander III, at the time of the Reformation in 1539, King Henry VIII switched the cathedral to the state-sanctioned Anglican Church of Ireland, as Catholicism was outlawed and persecution was widespread.

After the end of the Penal Laws and Catholic Emancipation in the 19th century, the relic remained in Christ Church, although it has been an object of pious devotion for Catholics.

Anglican Archbishop Michael Jackson of Dublin said the return of the heart is of huge significance to the people of the Irish capital and brings them “great joy.”

“Our deep thanks and warm appreciation go to all who have worked tirelessly to make this day of restoration possible,” he said, particularly citing the national police.

A spokesman for Christ Church Cathedral said a proper shrine to St. Laurence will now be instituted in the church, where people can pray and honor the memory of the patron saint of Dublin.

St. Laurence played a key role in the Irish church reform movement of the 12th century. He died in 1180 and was canonized in 1225 by Pope Honorius III.

PREVIOUS: Pope: Crucifix is a sign of God’s love, not just a piece of jewelry

NEXT: Ghana’s bishops launch project to clean up corruption, environment