Mass attendance is down again — but among whom? 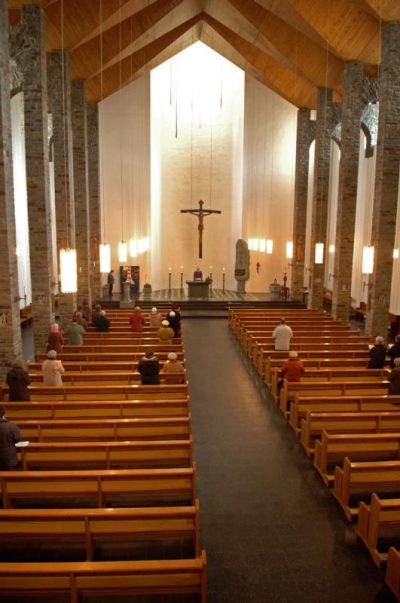 Worshippers are scattered among pews at a church during Mass in 2011.  (CNS file photo)

With that in mind, let us examine a recent Gallup survey that reported a continued and disconcerting (or so it would seem) drop-off in Mass attendance by Catholics, continuing a decadeslong trend.

Approximately every 10 years beginning in 1955, Gallup has reported a steady decline in the percentage of Catholics who report attending Mass regularly. From a high of 75 percent in 1955, the figure tailed to 46 percent in 1983-86, and reached an all-time low of 39 percent in 2014-17, according to the most recent survey issued in early April.

The disappearance of younger Catholics from Sunday assemblies continues to show up in Gallup’s survey. Only 19 percent of Catholics ages 21-29 attend Mass once a week or “almost every week,” versus 44 percent who say they “seldom” attend and 11 percent who “never” attend.

“Given that young Catholics are even less devout,” Gallup reported, “it appears the decline in church attendance will only continue. One advantage the Catholic Church has is that the overall proportion of Americans identifying as Catholic is holding fairly steady. However, that too may not last given the dwindling Catholic percentage among younger generations.”

A particularly jolting — and, to those who claim any religious faith, disconcerting — finding of Gallup’s survey is the response among U.S. adults ages 21-29 to “religious affiliation.”

The segment claiming Catholic as their “affiliation” has declined in the past six decades by a third — from 29 percent in 1955 to 19 percent in 2014-17. Conversely, a full one-third of those ages 21-29 currently claim “none” or “undesignated” as their faith affiliation, according to Gallup; six decades ago, that figure was 1 percent.

None of this should be taken lightly, of course, if the U.S. Catholic Church is expected to maintain and even flourish in the years ahead. But let’s take, for example, the 56 percent of Catholics ages 21-29 who (according to Gallup) attended Mass regularly in 1965-66 and follow them to the present.

Looking at two other groups whose age ranges mesh with these surveys, we see similar results:

Granted, it is unlikely that Gallup has surveyed the exact same people every decade, and the decline in church attendance is not to be taken lightly. But these decade-to-decade progressions do suggest a faith “stability” among many Catholics that should not be overlooked.

Still, the greater question may not be how many attend Mass, or get involved with their parishes, but why — or why not?

Is the Catholic faith “irrelevant,” in today’s world? Is the church too political? Not political enough? Did its opposition to birth control, its social justice advocacy, its males-only clergy, its sex abuse scandal, its Second Vatican Council, turn people away, or prevent them from coming in? Or was it something as simple (and disturbing) as a run-in with a particular pastor, principal, religious education director or person in the pew?

All have been cited in various surveys over the decades, but after 2,000 years, there is precious little that is going to change about the faith and how it operates in the real world. Given that, then, how do we, as Catholics, make our parishes, liturgies, programs and processes more appealing to Catholics and non-Catholics alike?

Numerous books, articles, studies and surveys have addressed that subject. What they boil down to, however, is relatively simple: Welcome. Invite. Include. Empower. Appreciate. Celebrate.

In other words, be the Catholic presence Jesus calls us to be to one another. Or, as St. Francis of Assisi (or someone equally wise) is reported to have said: “Preach the Gospel at all times — and when necessary, use words.”

PREVIOUS: Some parishes across U.S. show growth, enthusiasm among members