An advocate for the Gospel of Life

For me, a highlight of the past month was seeing Harvard law professor Mary Ann Glendon receive the University of Notre Dame’s Evangelium Vitae medal.

I have always been interested in this award, named after St. John Paul II’s tremendous 1995 encyclical whose English title is “The Gospel of Life.” I was the first recipient of the award in 2011, and each year I’m delighted to see it given to people more deserving than myself: Helen Alvare, the Sisters of Life, Rep. Chris Smith and his wife Marie, the Little Sisters of the Poor, and so on.

These honorees have truly “served to proclaim the Gospel of Life by steadfastly affirming and defending the sanctity of human life from its earliest stages,” in the words of the Notre Dame Center for Ethics and Culture that presents the medal annually.

Even in this august company, Professor Glendon stands out, for reasons worth reflecting on as we confront a secular world that can seem very hostile to the faith and its pro-life values.

Her accomplishments are many. Through books like “Abortion and Divorce in Western Law” and “Rights Talk,” she showed how our country developed the most extreme and divisive policies in the Western world on abortion and other issues — by wrongly treating them in terms of the nearly absolute “right” of the isolated, freely choosing individual. She developed these ideas further while teaching at Harvard Law School, as a devout Catholic in one of the most secular and liberal institutions in the country.

Her public service includes terms on the President’s Council on Bioethics and the U.S. Commission on International Religious Freedom. She served as the Vatican’s representative to the United Nations World Conference on Women in 1995 — and later as U.S. ambassador to the Holy See. Apparently she is the first person in history to represent the U.S. to the Vatican, and also to represent the Vatican to the U.S. (and other nations), in an official capacity.

The 1995 U.N. conference’s final declaration condemned forced abortion and sterilization, female infanticide and prenatal sex selection as “acts of violence against women.” This was a remarkable victory: The conference was held in Beijing, the capital of a country where these are practiced; China’s coercive population policy was supported by the U.N.’s own family planning agency; and that agency received funds from the United States under the Clinton administration. 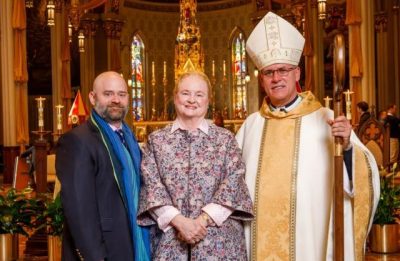 This is only a snapshot of a lifetime of accomplishment. Which makes it remarkable is that Mary Ann Glendon is also one of the most unassuming, affable and self-deprecating persons I have ever met.

When receiving Notre Dame’s medal, she said she was “overwhelmed” by this recognition. Her acceptance speech spoke less of herself than of the four longtime friends from Boston, present at the ceremony, with whom she founded the group “Women Affirming Life” many years before.

She spoke of the unsung “rank and file” of men and women who uphold the dignity of human life against terrible odds, and she was delighted that her daughters and their husbands and children were able to celebrate the event with her.

How to achieve great things and advance urgent messages in a world prepared to put up great resistance? Embrace family and friends who support you and give you a sense of perspective. Approach everyone, including opponents, in a friendly and gentle way, making the conversation about the message you serve rather than about yourself.

In short, speak the truth in charity and humility. It’s a message all of us, not least our political leaders, should be reminded of every day.

NEXT: Making the world greater