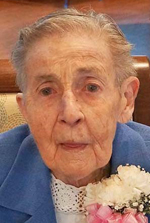 She entered the Sisters of St. Joseph in September 1948 and professed her final vows in August 1956.

Sister Rose ministered in the Archdioceses of Philadelphia and Washington and the dioceses of Allentown, Arlington and Harrisburg.

She is the sister of the late George Patterson and sister in law of Barbara Patterson. She is survived by nieces, nephews and members of her congregation, the Sisters of St. Joseph.

The funeral Mass was celebrated April 23 at St. Joseph Villa.