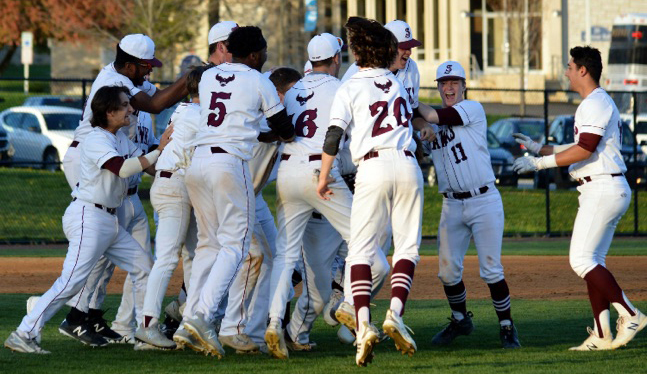 It’s fair to say that every baseball or softball player has fantasized about heroically lifting a team to victory on a walk-off, a term coined by Major League Baseball Hall of Fame pitcher Dennis Eckersley in 1988.

So far this season, several Catholic League student-athletes have experienced the thrill of delivering a knockout punch to the opposition, followed by the euphoria of being mobbed by appreciative teammates and coaches.

In an extra-inning nail biter April 19, Archbishop Ryan took a 5-4 lead in the top of the eighth. Undaunted, the Cahillites loaded the bases with two outs in the bottom half.

On a 2-2 pitch, John Kelly singled to right field, scoring senior Jimmy Ferioli (pinch running for junior Frank Jaworski, who had walked) and sophomore Gaetan Grandelli (hit by pitch) for a thrilling 6-5 win.

“I wasn’t really having a great day at the plate but my teammates kept me into it,” said Kelly, a first baseman. “I just took a swing on the first fastball I saw and then it happened to fall. It has always been a dream and when everyone ran out, the feeling was unreal to celebrate a huge win with my brothers.”

Furnishing sweetener, Kelly’s heroics made his sophomore brother Jason Kelly the winning pitcher because he had pitched the last 2 1/3 innings.

“It was definitely special to have my brother on the field with me because we have never been on the same team,” said John, who also started for the Roman basketball team that won this year’s Catholic League championship at the Palestra and then the PIAA Class 6A state title in Hershey. “Having him out there just made it a great win. It was a total team effort to pull that out.”

Jason Kelly, a starting third baseman, couldn’t have been more thrilled for his older brother. He also felt like he owed him one, because in the ultimately victorious eighth, he had struck out with two on and one out. Sophomore Robert Buckley (two runs batted in) had kept the inning alive and loaded the bases with an infield single.

“I was thinking, ‘John, please get a hit,’ and I hear my coach screaming, ‘He’s in the Palestra, he’s in the Palestra,’” said Jason. “So when I saw the ball get hit over the second baseman’s head my heart dropped, and when the runner scored, I was never so happy.”

Jason said his striking out and John singling home two runs in the same inning was symbolic.

“We just support each other and always try to help each other out,” he said.

Unbeknownst to him, Jason Kelly would make his older bro proud with a game-winner of his own 11 days later. On April 30, Roman and St. Joseph’s Prep were deadlocked at 4-4 in the home seventh. With runners at first and second, Jason Kelly did more than just single. He belted a three-run homer over the left-center-field fence to give the Cahillites a stunning 7-4 victory.

“It was great,” said Kelly. “That whole game I was seeing mostly all breaking balls so I knew I wasn’t going to see a fastball. When I was batting I was thinking that just a little single would get the runner home because we had a speedy runner (aforementioned Gaetan Grandelli) on second.

“The count was 0-2 and I saw two straight curveballs and I knew he was going to throw it again, so it happened to break right down the middle and I just tried to hit the ball hard. It was my first walk-off and it is something I’ll never forget. A walk-off home run is what every baseball player dreams of.”

About 27 miles away on that same afternoon, Archbishop Wood had battled back from a 4-0 deficit thanks mostly to a three-run homer by senior John Gifford in the sixth. After holding Neumann-Goretti scoreless in the seventh, Wood sophomore Ryan DiVergilis started the seventh with a long double that clanked off the right-field wall.

After a single by senior Kyle McNamee and an intentional walk issued to senior Mike Ferrara loaded the bases with one out, junior Antonio Rossillo was in prime position to send the defending Catholic League champion Saints home with a rare loss.

With the crowd noise escalating and his teammates doing everything possible to rattle the NG pitcher, Rossillo smashed a shot deep enough to score DiVergilis with the winning tally.

“First off, it was a huge win for us against Neumann,” said Rossillo. “I have been in some situations like this before in the past but nothing was like this one.

“My team, the parents, and the coaches are cheering me on and I feel locked in. The first pitch was a good one, so I swung and hit a line drive to left field and the left fielder dives and catches it. Then (DiVergilis) scores and we all go crazy. We jump on top of each other and throw water everywhere. It was one of the greatest experiences of my high school career.”

In a contest April 26 at Immaculata University between St. Joseph’s Prep and Bonner-Prendergast, the Hawks seemed in control, scoring individual runs in the second through fifth inning to lead, 4-1, heading into the top of the sixth.

The Bonner-Prendergast offense suddenly awakened and scored six runs to take a 7-4 lead. But the Prep didn’t fold. The Hawks rebounded with a pair of runs in the sixth that got them to within 7-6 and two more in the seventh for the comeback victory.

Up with the bases loaded and one out, senior third baseball Luke Donaphon supplied the walk-off hit with a long single to left field, scoring senior pinch-runner Jack Clinton from third base.

“I didn’t have a doubt that I would get the job done,” said Donaphon. “I was trying to drive something to the outside. Right off the bat I knew that even if he caught it, the run was going to score.

“The win was huge for the feeling around our team. We had lost three close ones to very good baseball teams, so (it was rewarding) to be on the other end of the stick this time.”

Down 6-3 in the seventh to St. Joseph’s Prep on April 17, Cardinal O’Hara appeared defeated. A rally, however, tied the game at 6-6, and sophomore Chad Walker was summoned off the bench to pinch-hit.

Walker didn’t disappoint. On a one-strike pitch, Walker ripped a shot over the right fielder’s head, and the Lions roared with delight as they paid homage to the clutch performer at first base.

“I was very nervous,” said Walker. “I didn’t want to let my teammates down. I just looked to get the ball up in the air to drive in the run. I was mobbed like crazy. It’s a great feeling winning the game for your team.”

Walker, however, had already experienced a walk-off.

“In Little League, when I was like 11 or 12 years old, we were down three in the last inning and I was up to bat with the bases loaded and I hit a walk-off grand slam over the fence to win the game,” said Walker. “I’ll never forget that moment.”

In a key Catholic League softball battle between two then-undefeated teams on a frigid April 17 afternoon, Taylor Schwartz obliterated a two-strike changeup and sent a grand slam over the left-field fence to lift Archbishop Wood to a 9-5 Catholic League victory over visiting Archbishop Ryan.

The senior had never before clubbed a high school home run or engineered a walk-off hit. She can scratch those two wishes off her bucket list.

“Walking up to the plate, I was very anxious considering my other two times up to bat I struck out,” said Schwartz. “After my third time making contact up the middle, I knew what I had to do.

“I saw the ball, made contact with my bat and knew at that moment that I got the job done. The feeling of hitting my first home run in a huge game like that was a feeling that I will never forget.”

Schwartz can thank junior varsity player Shelby Pillar for filming her historic feat. Behind the fenced-in dugout, Pillar captured the build-up, the swing, disappointed Ryan players turning their heads to watch the ball’s super-quick flight, and then lots of screaming from ecstatic Vikings who rushed to the plate to greet the newest member of the Babe Ruth Club.

“It was a dream come true,” said Schwartz. “Running around the bases with the biggest smile on my face, turning around third and seeing my teammates at home plate was just unbelievable. It was a team effort and I couldn’t have done it without the help of them. Knowing that I helped my team win the game was such a rewarding feeling.”

NEXT: McDevitt HS senior racks up 200 career lacrosse goals, and a legacy