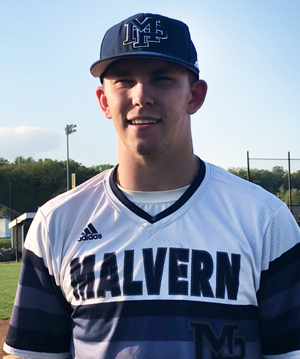 Brady Devereux watched his fastball get slapped to third base, where sophomore Connor Offshack fielded the ground ball, momentarily bobbled a short-hop, and fired a laser to junior first baseman Charlie Andress for the final out of the eighth inning.

In the home eighth moments later, Malvern freshman Lonnie White would get hit by a pitch and scamper all the way to home when a pick-off attempt sailed into right field and the ensuing long toss to third ended up skipping into left field territory.

Devereux was one of the first people off the bench to greet an exuberant White as he crossed the plate.

Malvern Prep had miraculously defeated Springside-Chestnut Hill Academy, 4-3, on May 8 to mathematically clinch its seventh Inter-Academic League title and fifth outright since 2011.

“From a team perspective, this win was a surreal experience that I am so lucky to be a part of,” said Devereux. “The game was an amazing come-from-behind win that I will never forget for the rest of my life.”

It wasn’t the first time Devereux celebrated a momentous win over SCH. In the final inning of last year’s PAISAA championship victory over the Blue Devils, Devereux struck out the first two batters and coaxed the final hitter into a lazy fly out to left field.

“I will not be able to get the image out of my head of me throwing my glove up in the air and Shane Muntz running towards me and our team dog piling on the mound,” said Devereux, a member of St. Thomas the Apostle Parish in Glen Mills. “It was unbelievable.”

Devereux and his mates will definitely — and happily — be unable to delete the craziness that led to Malvern’s 22nd league title (seven shared).

Outside of a combined pitching effort by junior starter Liam Dabagian (3.1 innings, 2 hits, 0 earned runs, 8 strikeouts) and senior reliever Billy Corcoran (3.2 innings, 2 hits, 0 runs), none of the frustrated Friars could manage anything noteworthy until the bottom of the seventh.

Down to their last three outs, senior Ryan Dillon led off with a single. White then walloped a home run over the right-center field fence to make it 3-2.

Two outs later, junior shortstop Grant Burgess struck out on a bouncing pitch to seemingly end the game. But the ball hit the dirt, so Burgess sprinted toward first. SCH was unable to execute the throw from home to first, and the Friars still had life.

Burgess then stole second to put himself into scoring position. With his teammates imploring him to find a way to keep the game going, Connor Dillon did just that, stroking a two-strike pitch up the middle to score Burgess from second. Amazingly, Malvern Prep had tied the game, 3-3.

“A lot of heart; a lot of character,” said Malvern coach Freddy Hilliard. We talk about it all the time, to play til the last out. We had 21 to play with until they got that last one. They had it, and they didn’t capitalize. Hats off to the kids for believing that they could do it and fighting with one out to play and making it happen.”

Then came the hard-to-believe eighth and a stunning triumph.

“We talk about adversity and how to deal with it, and having that energy throughout the game to make us win the close ones,” said Devereux. “Everyone is a part of it. Everyone understands the culture of Malvern baseball and being together as one.”

Asked to assess his experience as a two-sport athlete — he played three years of varsity basketball at guard and four years of baseball as pitcher, outfield, and first base — Devereux waxed philosophical.

“Sports have taught me a lot about myself as a person and how to be a part of a team,” said Devereux. “I have learned from many players before me how to be a leader and also leading by example.

“One thing that my coaches and previous captains have taught me is no matter what your role is or who you are, doing the little things like grabbing water or picking up balls is extremely important. Things just as small as that can transfer to another player and he’ll then understand what needs to be done. Also I have learned how to push others and get everyone to be their best.

“My coaches are great at demanding excellence from us as a team and this has helped me develop the characteristic of wanting others around me to get better. I have learned how to become selfless and put my team and other people in front of my personal gain. This is a trait in life that will be very helpful to any future team I play for or group I work in. It is not all about me.”

“He loves to compete at everything he does, no matter if it’s pitching, hitting, fielding in baseball, or guarding the other team’s best player in hoops,” said Hilliard. “He loves the challenge and he loves to be challenged.

“He’s also very determined. He came into the program known for his abilities as a pitcher, but over the past few years he’s worked his tail off in the offseason hitting in order to try to contribute on the offensive side. He struggled with the bat the previous couple years and didn’t get a whole lot of opportunities, but he persevered and kept working at it even though he wasn’t sure if he’d ever be able to break into the lineup.

“This year he’s not only turned into a solid contributor to our offense, but he’s done so well that he’s been hitting in the middle of our order and that’s all because he believed he could do it even when some doubted he could. That’s something special and I’m very happy and proud to see his hard work has paid off.

“As a student and teammate, he’s extremely outgoing and personable. He’s always smiling and joking around with teammates, classmates, coaches, and even his teachers. He’s definitely a fun and energetic kid to be around who likes to be in the center of things.”

Teammates concurred with Hilliard. Junior Chris Newell said Devereux is “always willing to do whatever it takes to win, whether it’s on the bump or in the batters box. He has really stepped up this year swinging it for us when we really had some holes to fill from last year.”

White said Devereux is a “good teammate, and people look up to him. He’s very fun to be around. He’s a go-to person if you ever need something. He is a very hard worker.”

The aforementioned Corcoran is looking forward to rooming with Devereux at the University of Pittsburgh, where both will play baseball.

“He’s a great guy and one of the best competitors you’ll see on the field,” said Corcoran. “You know he wants to win every time out there and cares about the team.”

“As a teammate as well as a player, he’s super energetic and vocal,” said Turner. “He was our most vocal leader on and off the court. He was always bringing positive energy to the team but also knew when we needed to get focused because he was super competitive in everything he does and it was a really fun and unforgettable couple years being able to play with him and be around him all the time.”

“He really wants to win and has great passion for the game,” said Muntz. “He’s a guy you want on your team because he will give you his all every time.”

No more needs to be said.

NEXT: All Catholics announced for spring Catholic League teams