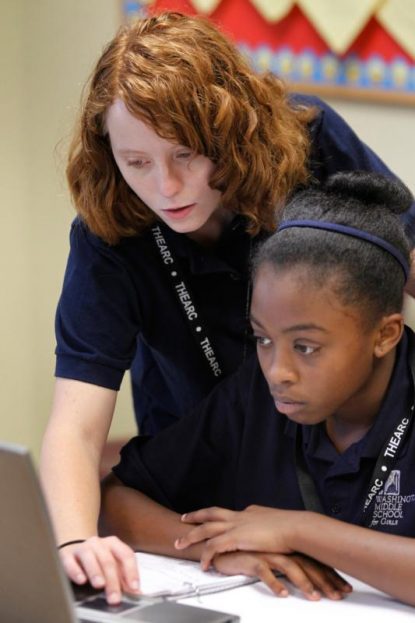 A gap year refers to a break that graduates can take researching, traveling or volunteering before beginning higher education or entering the workforce.

After graduating from the University of Dayton in Ohio in 2015, Abby Rieker, 25, volunteered with Mercy Corps in Savannah, Georgia, where she worked with adults with developmental and physical disabilities.

Rieker said she was looking for a volunteer organization that had both community and spirituality aspects, and would allow her to use her special education degree.

“Part of your commitment was having a spirituality night once a week,” Rieker said, and “having a community night twice a week, or eating dinner together or spending time together” with the other volunteers in the community.

Describing her work, Rieker called herself a “community connector” since she connected her clients with the larger community.

One of her clients was bed-bound with cerebral palsy and scoliosis, Rieker said.

“To get him into the community,” she said, “we tried to Facetime someone in all 50 states for the year. … He loved to talk to people and in each state. He would have a list of questions.”

A positive experience in Savannah prompted her to volunteer a second year with Mercy Corps, this time at St. Michael’s Association for Special Education located on the Navajo Nation Reservation, where she works as an employee today.

A unique part of her volunteer experience was attending Navajo traditional ceremonies, which had an impact on her Catholic faith: Seeing “the mysteries out here really helped me to be more open and understanding toward the Catholic mysteries.”

Yuko Gibson, 25, who graduated from the University of Notre Dame in 2014, used her two years working as an assistant at L’Arche Greater Washington, D.C., in Arlington, Virginia, as a gap experience before starting medical school.

L’Arche is an interdenominational community where assistants live and work with “core members,” people with developmental disabilities.

Gibson said that her time with L’Arche was one most joyful and formative experiences in her life.

“There was much less emphasis on what I was able to produce or do and much more emphasis on getting to be with people and just slow down,” she said.

Although an assistant is technically not a volunteer, assistants still serve others.

Core members need help with showers or going to the doctor, Gibson said. But that service is often reciprocated as core members also support assistants in vulnerable moments like when they feel homesick or frustrated.

Faith and community are an intentional part of daily life at L’Arche, Gibson said.

“Church was an important part of our weekly rhythm and one of my favorite parts of being at L’Arche was going to Mass with core members on Sundays,” she said.

And Gibson benefitted from attending core members’ Episcopalian and Methodist churches. “I learned a lot about other faiths that provided some clarity in my own faith and also some questions for me,” and “I was really humbled to be invited into their faith lives.”

Celia Kennedy, 21, a sophomore at Washington University in St. Louis, served with NET Ministries after graduating from high school in Minnesota.

Unsure of what she wanted to study in college, Kennedy deferred her college acceptance and spent nine months on a “12-person traveling team” in a van driving from Minnesota to the West Coast, and leading young adult retreats at Catholic schools and parishes in California, Oregon, Washington and Arizona.

Her experience helped her learn how to speak about her faith with others, how to share and defend it, and how to make it a part of her daily life, she said.

“I approached college at lot differently because I had a year away from school and I had gotten a bigger picture of what the world looks,” Kennedy said.

“Doing a year of service just makes you more in touch with yourself and with the world around you,” Rieker said. “It brings to light issues that you may have never thought about if you just went straight into the workforce.”

***
Capizzi is the special projects editor at Catholic News Service.

PREVIOUS: A prayer for graduates

NEXT: Three tips for reflecting on life’s highlights before moving on