Fear for an abused woman, sadness for what we’re becoming

The following statement by Pittsburgh Bishop David A. Zubik was released June 14 after U.S. Attorney General Jeff Sessions announced at a June 11 news conference that he was reversing an immigration court’s decision granting asylum to a Salvadoran woman who said she had been abused by her husband. See the range of reactions by the U.S. Catholic bishops to the decision, here. 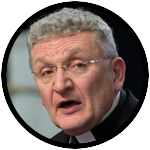 There is a real sadness in Attorney General Sessions’ statement that physical abuse of a Salvadoran woman by her husband could not be a reason for her to be given asylum. U.S. asylum laws, he said, cannot remedy “all misfortune.”

Have we given up on doing good in the world? Are the lives of women in real physical jeopardy simply a “misfortune” that we can do nothing to help?

For the United States to abandon years and years of offering a safe haven to women being physically beaten, to victims of gang violence and domestic terrorism, accomplishes nothing. It doesn’t improve the economy, save jobs, or somehow heighten our internal security. Rather, it seems an almost calculated willingness to score anti-immigration rhetorical points at the expense of brutalized women.

These women fled to the United States to escape being viciously beaten in countries where their governments could not protect them. They will now be returned to those beatings. How could our response be anything but fear for them and sadness for what we are becoming?

At the same time, I must join so many voices to condemn the separation of young children from their families at the U.S.\Mexican border. Yes, protecting our borders is important. But separating infants from their mothers does nothing to accomplish that.

Decency, morality, security and fairness have been at the heart of our asylum laws for many years. Let us show the world that we will continue as a people to try to fight “misfortune” whenever and wherever we can.

PREVIOUS: Show you’re a Catholic school grad and appear a fool — for Christ

NEXT: U.S. embassy works with Vatican to promote religious liberty for all