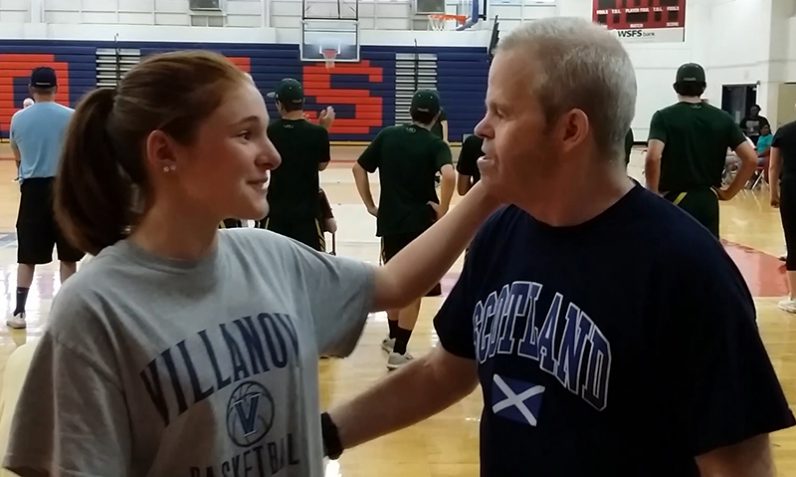 Amanda Shaughnessy, a freshman at Cardinal O’Hara High School, speaks with Ward Myers, a member of the archdiocesan Don Guanella and Divine Providence (DGDP) Communities. Students from O’Hara and from Bonner-Prendergast Catholic High School closed out a season of wiffle ball games with DGDP on May 30. (Photo by Gina Christian)

Baseball has always been a sport for statisticians, and for one Delaware County team, this season’s numbers added up to a “win-win.”

The Challenger League, formed by adults of the Don Guanella and Divine Providence (DGDP) communities, played its season-ender on May 30 at Cardinal O’Hara High School. Through DGDP, the league’s players — all of whom are adults with intellectual and developmental disabilities — receive a broad range of support from archdiocesan Catholic Social Services (CSS).

Students from O’Hara’s Community Service Corps (CSC) assisted the DGDP players as they squared off in a game of wiffle ball against the boys’ varsity baseball team from Bonner and Prendergast Catholic High School.

“They love the sport, and they love the Phillies,” said Gula, who launched the project 25 years ago. “You’ll see some of them emulating various Phillies guys.”

The Challenger outreach pairs the DGDP participants with volunteers who accompany players throughout each match, escorting them to each base and back to home plate as needed. Sideline banter, rowdy cheers, food and fellowship round out the games.

For the high school students, the weekly games have opened up horizons that stretch far beyond the baseball diamond.

“You can only learn so much in the classroom,” said Charlie Wieners, moderator of the Cardinal O’Hara CSC. “This is the real world. And for them to see that there are other people, whose lives are important to them, who are different from them, is such a learning experience.”

The CSC members devote approximately three hours of their time per week to play wiffle ball with the DGDP team. Students eagerly embrace the commitment, which is separate from any required community service.

“I just love to see the DGDP players, to interact with them,” said Gavin Lewis, a freshman at O’Hara and one of the CSC leaders.

Amanda Shaughnessy, a fellow O’Hara freshman, was drawn to work with the DGDP team for family reasons.

“My mom’s brother passed away from medical complications related to his developmental disabilities,” she said. “And so my mom always wanted us to get involved in helping this community.”

Family ties also prompted Gula to pitch in. “This started off as my daughter’s service project for confirmation,” he said.

Watch a video of the season finale at Cardinal O’Hara High School:

While organizing the confirmation project, Gula reached out to a longtime classmate — Father Dennis Weber, S.C., the director of ministry and mission at DGDP. Both had attended Monsignor Bonner High School, where Gula was a baseball hall-of-famer.

Father Weber appointed Gula as a volunteer coach at what was then Don Guanella Village, which eventually merged with the Divine Providence Village for girls and young women.

Nearly three decades later, Gula estimates that “hundreds of friends and colleagues” have volunteered with the project, which was inspired by the Little League Challenger Division, the adaptive baseball program founded in 1989 for individuals with physical and intellectual challenges.

Both Gula and Wieners note that the student volunteers have been profoundly transformed by their interactions with the DGDP community.

“I can see the students growing,” said Wiener. “There’s no question that these folks from DGDP are helping to form these kids, to develop them into young men and women. It’s a partnership.”

Above all, the student volunteers keep the focus on the fun.

“Don’t be afraid to just dive in and just have a great time with them,” said Lewis. “Don’t treat them any different. They’re just people, like you and me.”