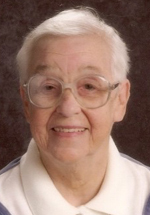 Daughter of the late Charles and Marie Eisenhauer, she was born in Lebanon, Pa. and attended St. Mary Grade School and Lebanon Catholic High School in Lebanon. She entered the Sisters of St. Joseph in September 1946 and professed her final vows in August 1954.

Sister Ruth ministered in the archdioceses of Philadelphia, Baltimore, Newark and Washington, and the dioceses of Harrisburg and Wilmington.

She is the sister of Helene Eisenhauer and the late Charles, Henry, Joseph, Richard, Lucy Eisenhauer, Marie Gibbons and Rosemary Steiner. She is survived by nieces, nephews and members of her congregation, the Sisters of St. Joseph.

The funeral Mass was celebrated May 15 at St. Joseph’s Villa.