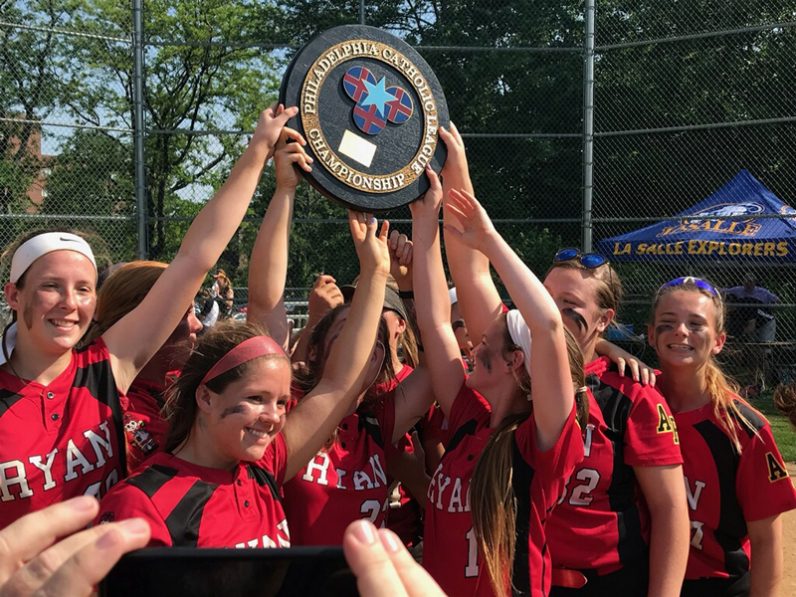 Archbishop Ryan celebrates their fourth Catholic League championship in the past five years with a 1-0 win over Lansdale Catholic May 25 at La Salle University. (Photos by John Knebels)

There was one out to go, but the game was still on the line.

Who wanted it? Who preferred that someone else take care of it?

Asked later, no player claimed she didn’t prefer the honor of recording the final out of Archbishop Ryan’s 1-0 Catholic League softball victory over Lansdale Catholic May 25 at La Salle University.

That included sophomore first baseman Sarah Vargas, who snared a line drive off the bat of sophomore Casey Meenan to clinch the Ragdolls’ fourth title in five seasons.

“I was kind of hoping that I would make the last play,” said Vargas, “but Dana strikes out everyone, so if that happens, I’d be grateful, too. I was in complete shock when I caught that and I didn’t know what to think. I was just so amazed.”

Her overall performance will be statistically remembered as among the all-time bests. 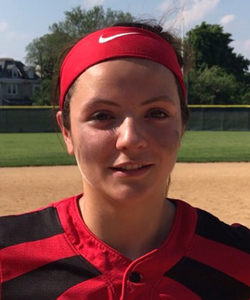 Ryan sophomore first baseman Sarah Vargas squeezed a line drive for the final out in the championship game.

“You always have to be ready because she’s not going to walk anybody,” said Vargas. “She’s either going to strike someone out or it will be hit somewhere. Pitching and defense works well together

“With two outs I was thinking that we had to make this play and then we would win. I couldn’t believe it that we only had one more out to go. I was in complete shock when I caught that and I didn’t know what to think. I was just so amazed.”

Asked to explain a playoff experience for the ages, Bell lauded the entire Catholic League.

“Having such a talented team that we have along with the great competition we face really makes the game of softball so much more enjoyable, especially (pitching against) tough batters,” said Bell. “It really makes that game more interesting.

“Words can’t even explain how excited I am. I know with my team not being able to win the championship last year, being able to come in and help them really means the world to me right now.” 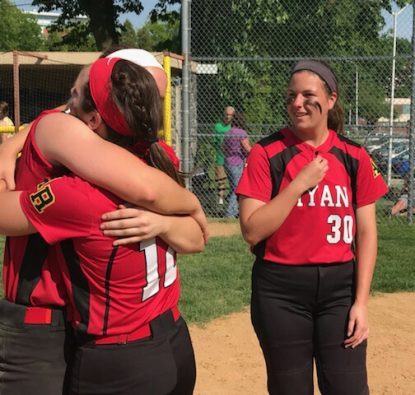 The Ragdolls celebrate their Catholic League-clinching victory. they now to the PIAA state softball playoffs.

Bell said she and the Ragdolls (22-2 overall) are not satisfied quite yet. After beating String Theory in the District 12 championship, 12-0, four days later, the Ragdolls begin PIAA state tournament play next week.

“I think the sky’s the limit,” said Bell. “I’m really excited to see how far we can make it this year.”

The hard-luck losing pitcher, sophomore Megan Burns, deserved better. Coming off victories over six-seed Conwell-Egan (2-1) and two-seed Bonner-Prendergast (15-4), Burns allowed only five hits and did not issue a walk. She also picked up her teammates after several fielding errors.

“It was a great game,” said Burns. “We fought extremely hard all season long and I couldn’t be more grateful to play on LC than anything else. We are a great group of girls with a passion to play softball and have fun in the game.”

Burns was unable to prevent the Ragdolls from scoring in the fifth inning.

Ryan senior catcher Haley Burns reached first on an infield error and advanced to second on a one-out sacrifice bunt by junior Erin Woltemate. With two outs, senior star and Kutztown University-bound Kate Ostaszewski came to the plate and did what she does best when she lined a single that scored sophomore pinch runner Haley Cattallo for the first and only run. 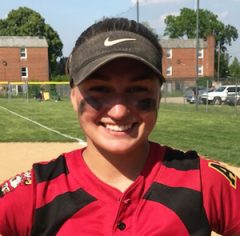 Ryan’s Kate Ostaszewski lined a two-out RBI single in the fifth inning for the winning and only run in the Catholic League title game over Lansdale Catholic.

“I knew I had to step up and, being a leader, get a hit,” said Ostaszewski.

Six outs later, including the final one that everyone wanted to be a part of, Archbishop Ryan was the 2018 Catholic League champion.

PREVIOUS: Ideal matchup shapes up as a reality for Catholic baseball final

NEXT: La Salle dispenses with suspense in 10-0 blow-out title win