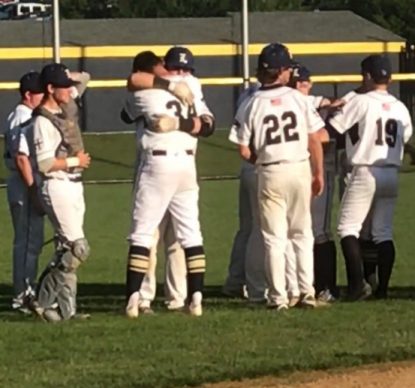 Members of La Salle’s baseball team share a final goodbye to a strong season, and to each other, after their 5-4 loss to Bensalem June 12 in the PIAA Class 6A semifinal. (Photo by John Knebels)

These would not be easy interviews.

After losing a PIAA Class 6A state semifinal to District 1 champ Bensalem, 5-4, in eight innings on June 12, La Salle was forced to watch the Owls and their boisterous fans celebrate throughout the environs of Neumann University in Aston.

A season that had included an outstanding record of 23-4, a Catholic League championship and a District 12 crown had come to a sudden end. Words weren’t easy to find, but the Explorers, despite visible disappointment, persevered.

“We had a great season,” said senior Joe Sortino. “This is one of the best teams I’ve ever played for. I’m going to miss all these guys. They’re some of my best friends. We were swinging the bat well. It wasn’t our day I guess.”

Although senior Anthony Cossetti (2-4, one run scored, one run batted in) and senior Shane Manieri (two RBI) supplied key contributions, Sortino was La Salle’s most potent offensive player with four hits and a run batted in. With La Salle trailing by 5-4 with a runner on first and one out in the bottom of the eighth, Sortino fought through an eight-pitch at bat before poking a single to right field to put runners at the corners. 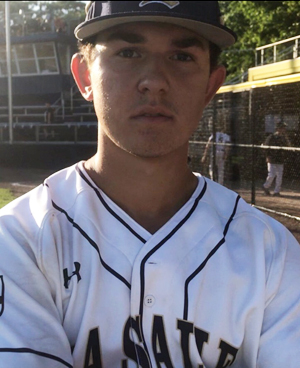 La Salle senior Joe Sortino had four hits and a run batted in in the 5-4 loss to Bensalem High June 12 in the PIAA Class 6A semifinal.

“I’m really proud of how he competed there,” said La Salle coach Kyle Werman. “He wasn’t going to go down without a fight. He gave us a chance, and we needed it.”

Two batters later, the bases were loaded with two outs. Senior Andrew Cossetti, the Catholic League’s Offensive Player of the Year who had already been robbed of a run-scoring hit on a great play by Bensalem’s centerfielder a few feet from the fence two innings earlier, slammed the first pitch he saw to deep left field.

A strong gust, however, joined hands as a best friend to the Bensalem left fielder, who tracked down the drive to end the game.

“I thought I hit it good,” said Cossetti, who next year will catch for St. Joseph’s University. “It just got caught up in the wind. There’s not much more you can do.”

The Explorers were hoping to take a long bus ride to Penn State and play for their third state title in seven seasons.

“We just couldn’t open the game up enough,” said Werman. “We allowed them to hang around and they’re a tough team. I was proud of our at-bats and our approach. We just came up short.

“It hurts. These guys are gonna feel this for a while, but I think they’re going to remember the type of group they had and that’s what’s going to stick with them.”