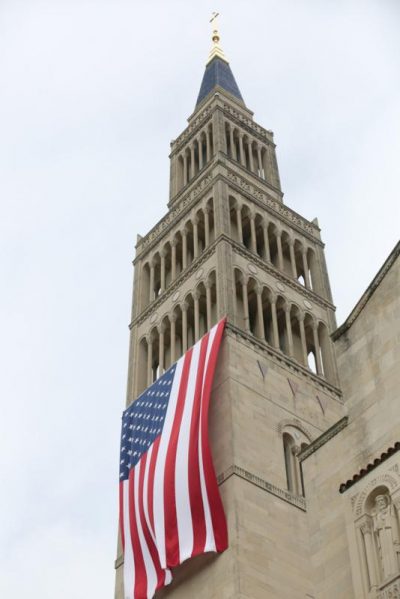 A large American flag is seen hanging from the bell tower of the Basilica of the National Shrine of the Immaculate Conception in Washington July 4, 2015. In the “Summa Theologiae,” St. Thomas Aquinas writes that love for country is a virtue, the same kind of virtue as love for one’s parents. (CNS photo/Bob Roller)

The pope was a patriot.

The year was 1983, and Poland was under martial law. St. John Paul II, making his second pastoral visit to his homeland, upon reaching the airport tarmac bent forward and kissed the ground. He remarked during the arrival ceremony that the kiss had a special meaning for him.

“It is like a kiss placed on the hands of a mother, for the homeland is our earthly mother,” he said. He said he considered it his “duty to be with my compatriots in this sublime, yet difficult historical moment of our homeland.”

In the 20th century, Poland was infected by Nazism and communism in succession, remaining in the hands of the communists following World War II. Decades of political suppression and propagandistic distortions were foisted on the Polish people. Historians now write of the undeniable influence that the pontiff had on the subsequent overthrow of communism in Poland and beyond.

As Angelo Codevilla put it, “He was a Pole, but beyond the regime’s reach. By identifying with him, Poles would have the chance to cleanse themselves of the compromises they had to make to live under the regime. And so they came to him by the millions.”

The pope clearly loved his country. With that love, that patriotism, firmly in place, his vision was clear, enabling him to see his native land’s true identity, and thus how and to what extent the contemporary godless regime was in fact a hideous distortion: powerful, perhaps, at the moment but utterly foreign to his people’s DNA. First came love. Then correction. After all, “The homeland is our earthly mother.”

With the rich young man, the Gospel of Mark gives us a similar example of correction within love:

“Jesus, looking at him, loved him and said to him, ‘You are lacking in one thing. Go, sell what you have, and give to (the) poor and you will have treasure in heaven; then come, follow me'” (Mk 10:21).

I think of the pope’s example whenever people bring up patriotism, or love for country. There are many Catholic homilists, authors and professors who eschew patriotism, at least American patriotism, ostensibly because of their faith. “America” or “American” is rarely a positive attribution and often used pejoratively as shorthand for unworthy, erroneous, “neo-Pelagian,” materialistic or Walmart.

With amusement, I have heard homilists say things like “in America, people (here insert any deadly sin or vice).” As if the fall of mankind actually coincided with the founding of our nation and still unaccountably emanates from our borders. Indeed, some seem to think that the opposite of “patriotic” is “prophetic.”

St. Thomas Aquinas helps here. In the “Summa Theologiae,” he writes that love for country is a virtue, the same kind of virtue as love for one’s parents: “Wherefore just as it belongs to religion to give worship to God, so does it belong to piety, in the second place, to give worship to one’s parents and one’s country.” (Worship here being understood as “honor and devotion.”)

We love and honor our country because it has given us life, sustenance, traditions and fundamental orientation analogous to our earthly parents and families. Like St. John Paul, we love our fellow countrymen because we share very deep things in common like siblings in a family. “I consider it my duty to be with my compatriots in this sublime and difficult moment.”

True piety is not the unappealing hyper-religiousness as it is usually portrayed. It is the virtue by which we give due honor to our sources, after God — especially parents and country. Not only is patriotism therefore not forbidden: It is required if one would be virtuous.

Can people take patriotism too far? Sure. Any virtue can be taken too far (which would render it no longer a virtue). An excess of patriotism is “nationalism,” which is a love for one’s country, ungrounded in love for God, leading to a narrow and arrogant distain for other countries.

Importantly, patriotism should not lead us to turn a blind eye to our country’s faults, and faults there undoubtedly are. We remember that our ultimate and truest “homeland” is not of this earth, but is our Father’s kingdom, for the coming of which we so often pray. Thus, as Catholics the most loving thing that we can do for our country is precisely what St. John Paul did for his: Bring Christ to it, and bring it to Christ.

For now, godly love for our country will clarify our vision, enabling us, like St. John Paul, to see and celebrate our native land’s goodness, potential and true identity — and thereby to reject that which distorts and defaces it. This Fourth of July, we celebrate our country not apart from or in spite of, but within our Catholic faith.

Father Curtiss Dwyer, a priest of the Archdiocese of Denver, is a U.S. Navy chaplain assigned to the Marines in Quantico, Virginia.

NEXT: Patriotism: A healthy and virtuous love of country