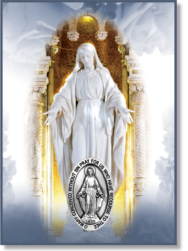 Vincentian Father Michael J. Carroll, director of the Miraculous Medal Shrine, will celebrate the liturgy, which will begin at 12:05 p.m. Those unable to attend are invited to watch a livestream of the event available through the shrine’s website at www.MiraculousMedal.org.

The Miraculous Medal has been an enduring and popular form of Marian devotion, originating in 19th-century Paris. On the night of July 18, 1830 (the eve of the feast of St. Vincent de Paul), the Blessed Mother appeared to Catherine Labouré, a young religious of the Daughters of Charity order. Catherine had prayed to St. Vincent de Paul, the founder of her order, to intercede that she may see the Mother of God with her own eyes. Summoned from sleep by her guardian angel, Catherine was led to the order’s chapel, which was aglow as if prepared for midnight Mass. As Catherine knelt by the altar steps, she heard the rustle of a silk dress and the Blessed Virgin appeared.

Mary sat in the director’s chair of the chapel, as Catherine knelt next to her, her hands resting on the Virgin’s lap. The Blessed Mother spoke to Catherine, saying, “My child, the good God wishes to entrust to you a mission. Have confidence. Do not be afraid. Graces will be shed on all … You will have the protection of God and St. Vincent.”

Mary later instructed the young nun to have a medal made for people to wear with confidence to receive God’s graces. The Blessed Mother provided a detailed design for what it now known as the Miraculous Medal.

Attendees at this special Mass will be able to see the replica of the chair contained in the shrine, along with a piece of the fabric from the actual chair upon which Mary sat when she appeared to St. Catherine Labouré at the Motherhouse Chapel in Rue du Bac, Paris.